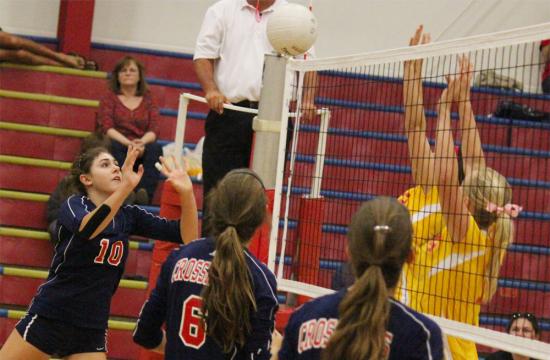 Crossroads (3-10) fell to the Paraclete (4-6-1) losing all three sets 25-20, 25-13, and 25-19 and struggled to find confidence after the first set where the Roadrunners played toe to toe against the Spirits until the score was 21-20 Thursday afternoon at home.

It has been a difficult season for the Roadrunners this year but they seem determined to keep hopes alive and eventually garnish some more wins.

“It was a really tightly fought battle especially the first and third games,” said Crist. “We got a little frustrated in the second set and I think that’s kind of it. Our problem today was dealing with frustration and dealing with errors which is one of the most challenging things an athlete can do.”

Mike Kelley, co-head coach of the Paraclete Spirits, thought that the game came down to confidence.

“We came into game one struggling a little bit but in game two our girls played solid,” said Kelley. “In game three we thought we were handily in the lead, but then we looked at the score and it was 13-10. Overall, it was a confidence thing today and I think that was the difference.”

Crist believes that athletes who lose need to learn how to “balance things from the past,” and “move forward.”

Next game for the Crossroads Roadrunners is away against Sierra Canyon Oct. 11 at 5:00 p.m.