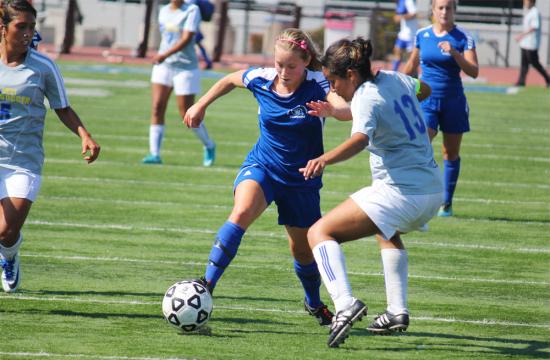 “It was a great bounce back game for us,” said Women’s Soccer Head Coach Aaron Benditson. “It’s always fun to score a lot of goals.”

Forwards Meg Pierce and Rosie Potts had two goals a piece to lead the Corsairs to victory.

First half, the Corsairs dominated the field with Pierce scoring the first and third goals, Tylor Fields scoring the second goal, and Desiree Kober adding a fourth to put Santa Monica College up 4-0 over the West Los Angeles Wildcats.

During the second half, Potts sprung into action scoring the fifth and sixth goals with midfielder Ixchel Ruiz, forward Daysi Serrano, and defender Carrie Markwith upping the score to 9-0.

“It was a good collective effort and I put challenges out there for the goals to be scored today, and the girls answered that,” said Benditson. “It was a feel good game all the way around and we got everybody into the game which is great, but we got to be ready for a war on Friday against Pierce.”

Next game for the Corsairs is away against L.A. Pierce at 4:00 p.m.