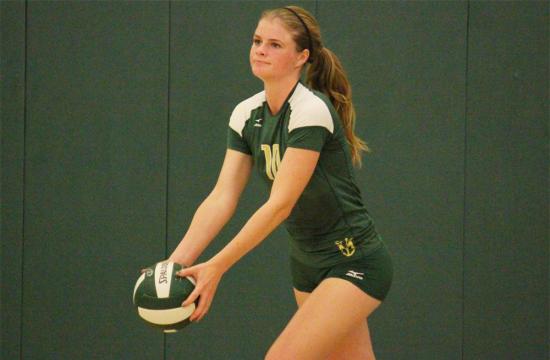 The Mariners are currently 2-0 in the Camino Real League

“I give it up to St. Monica’s,” said St. Bernard’s Head Coach Chris Ceballos. “They are a great team and they have one amazing hitter, Dominique Booth, and she’s a powerhouse.”

Booth, a recent transfer student playing her first year with St. Monica’s, led the Mariners with 23 kills in four sets to smash through the defense of the Vikings whenever the Vikings seemed to find their groove.

The Vikings soon found it difficult to recover after battling St. Monica’s losing the first two sets and only finding a way to beat the Mariners during set three 25-17.

Brenda Gonzalez, Head Coach of the Mariners Volleyball team, thought that the Mariners played a good game against St. Bernard and regrouped well in the fourth set to win the game 3-1.

“I adjusted my line up after the first two sets,” said Gonzalez. “They switched their line-ups so we adjusted, and I switched my middles to adapt to them.”

Booth thought that the Mariners did a good job staying calm and playing the game.

“We have a really good team this year,” said Booth. “They have a great team as well and some amazing hitters but we just needed to play our game so we just focused.”

According to Booth, the setters for the Mariners did an “amazing job of picking who to set” and “what time.”

Ceballos blamed the loss on injuries and a jittery team that he feels can beat St. Monica’s if given another chance.

“Our girls were a little bit nervous, and we had a few injuries coming into the game,” said Ceballos. “I think it will be an even better match when we see them the second time around.”

A rematch between the Mariners and the Vikings is scheduled for Oct. 18 at St. Bernard’s in Marina Del Rey.

Next game for the Mariners is away against Mary Star of the Sea today at 6:00 p.m.