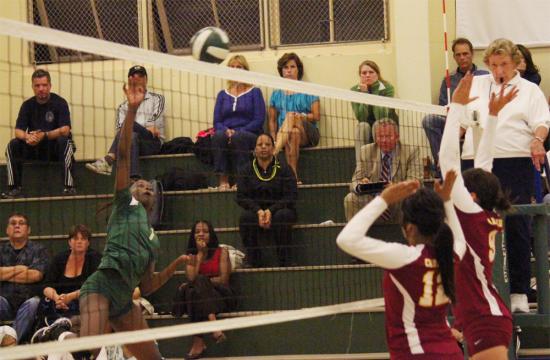 St. Monica High School (8-0) rocked like a ship weathering a storm against Cantwell-Sacred Heart of Mary High School (3-6) winning three out of five sets of play that witnessed both the highs and lows of the Mariners before they finished off the Cardinals 16-14 Tuesday evening at home.

The Mariners won the first two sets 25-21 and 25-20 before slipping and losing the third and fourth sets 25-12 and 25-19 only to regain their footing during the fifth set to secure a victory for St. Monica High School.

The Mariners remain undefeated in both league and non-conference play, and comes after recent wins away against Calvary Chapel 3-1 and Holy Family 3-0.

Brenda Gonzalez, Head Coach of the Mariners Volleyball team, thought that the Cardinals figured out the Mariners in the third and fourth sets.

“They figured us out and then they challenged us,” said Gonzalez. “They played great defense and didn’t let us get away with stuff.”

First set was neck and neck with Dominique Booth scoring seven kills and Briana Nixon scoring six until Booth slapped in two more consecutive kills to lock up the set and peg up nine total kills.

Second set the Mariners sailed straight through the Cardinals immediately going up 3-0 on a kill by Booth.

The Cardinals retaliated and took aim eventually harboring a slight command at 20-18 in the second set before Mariners middle blocker Chanel Smith found her target and scored a kill to up the game within one at 20-19.

Smith used her momentum to block the Cardinals attack on the successive volley to tie the score at 20-20 and Lisa Engler added a kill on the next point to shift the game back in favor of the Mariners 21-20.

Amanda Howe added a nice ace to put the score at 22-20 before Smith added another kill to make the score 24-20 after an error by the Cardinals gave the Mariners the edge.

The confidence of the Cardinals seemed to shatter on the next serve by Howe and the Mariners were handed their second match of the evening 25-20.

During the third and fourth sets the Mariners fell asleep at the wheel and were shut down 25-12 and 25-19 before waking up in with a jolt in a fifth set that saw Booth nail three aces, three kills, and one enormous block before a back corner kill by Savannah Craigen shot the Cardinals down to end the game 16-14.

Gonzalez did her part to call a few key time-outs in order to motivate the Mariners to secure the win over the Cardinals.

“I just tried to get the girls motivated in the last set because I felt that they got a little too content after the first two sets,” said Gonzalez.

Next game for the Mariners is away against St. Paul Thursday, Oct. 11 at 6:00 p.m. before they gear up to play in the Brentwood tournament Friday and Saturday and undefeated Pacifica Christian (10-0) at home Tuesday, Oct. 16 at 5:00 p.m.