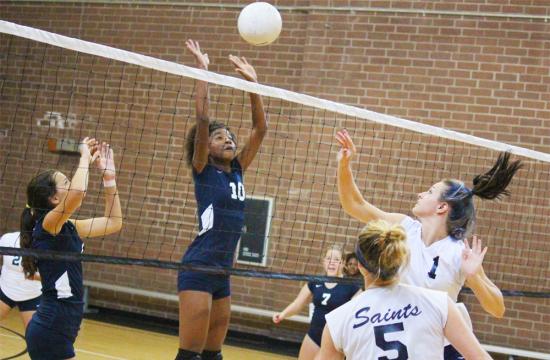 New Roads (6-2) beat Lighthouse Christian (3-9) in four highly competitive volleyball sets where the Saints won the first set 26-24 before the Jaguars responded in the next three sets 25-23, 25-23, and 25-17 to win the game Thursday afternoon at Penmar Park.

The Jaguars are now first place in the Coastal League with a 4-0 record.

New Roads Volleyball Head Coach Benny Hammond thought the first set was a challenge for the Jaguars and that the Saints gave them a good game in all four sets.

Lighthouse Christian’s Volleyball Head Coach Jaymie Jimenez thought that her young team played well noting that Laveile was the only senior on her team.

“I think that we did a lot better then in our game against St. Monica’s last week,” said Jimenez. “Today was a heartbreak but I finally got to see that they had it in them to keep up the fighting and that they really wanted it. So that is something positive from this match.”

Laveile and the Saints went to work early on New Roads pounding away and catching them by surprise by winning the first game, but the Jaguars adapted and were able to win the final three games to secure the league game victory.

“Regardless what the end score was, I thought that my girls really wanted it,” said Jimenez. “They fixed whatever they needed to fix and this time they fought for it and were more aggressive.”

Next game for Lighthouse Christian is at home against Rolling Hills Prep on Tuesday at 4:00 P.M.

Next game for New Roads is away against Rolling Hills Prep today at 4:00 p.m.