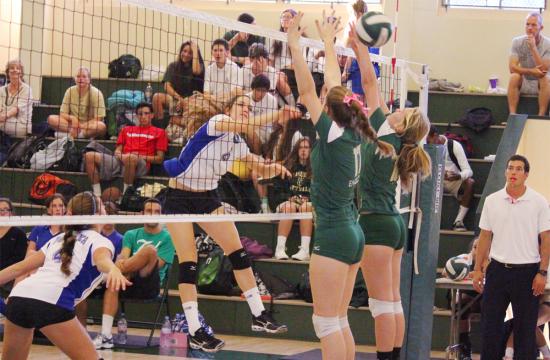 Volleyball is an intense sport both physically and mentally and the long awaited non league match-up between Pacifica Christian (11-0) and St. Monica (8-2) proved that the team with the coolest heads and most aggressive hitters will win the game.

Pacifica Christian dominated St. Monica on all areas of the court with kill after kill in three straight sets 25-15, 25-16, and 25-11 to sink the mighty Mariners at St. Monica Tuesday night.

“I thought Maile Lane had one of her best offensive games,” said Allen. “Everything she touched she seemed to put away.”

The troubles for St. Monica began early in the first set when Mariners Cambria Lagana and Chanel Smith collided on the court near the base of the net while trying to set the ball for Mariners outside hitter Dominique Booth.

Both players were down on the court for a few intense moments and Mariners Volleyball Head Coach Brenda Gonzalez made the decision to bench the two players until the middle of the second set.

Lagana was just cleared to play after missing the Brentwood Volleyball Tournament last weekend after she sustained a concussion against Cantwell Sacred Heart and this could have factored into Gonzalez’s decision not to play starter Lagana after the collision until the middle of the second set.

Without Lagana or Smith, there was little Booth could do on her own to liven the offense and defense of the Mariners who were down 9-2 in the second set before Booth and the Mariners were able to trade points on kills with Pacifica Christian to come back in the game 21-12 but by then it was too late.

By the time the third set rolled around Pacifica Christian’s all star outside hitter Grace Minchin, who has been recovering from recent injuries, had already been benched and Maddie Reasner stepped in to fill her spot without missing a beat.

“Maddie Reasner played outside for one of the first times and she did great,” said Allen. “She had a lot of kills so it was nice seeing people fill in where they were needed.”

The Mariners went up 7-4 in the third set with Booth leading a comeback to get St. Monica rolling again, but Reasner and the Seawolves had none of that and ended up winning the third set easily.

Pacifica Christian’s starting freshman Liz Hook served for the final eight points to put a deadbolt on the game 25-11 dampening any possibility of a comeback by the Mariners.

Gonzalez thought the loss was hard for the Mariners.

“It was a tough one for sure and I think we were a spin off of yesterday’s match,” said Gonzalez. “Emotions were low after a whole week of volleyball games and matches and I think our team couldn’t handle the emotion behind all of it.”

Next game for Pacifica Christian is a league game at home Thursday against Yeshiva (0-6).

Next game for St. Monica is an away rematch against El Camino league rival St. Bernard (5-9) Thursday.