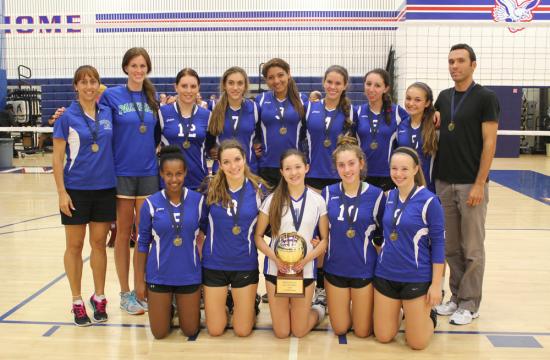 Pacifica Christian beat Mayfield in two matches 25-19 and 25-18 to win the championship game at the Brentwood Volleyball Tournament that saw a good number of top volleyball teams exhibit their talents and skills Saturday afternoon Oct. 13.

Jeffrey Porter, Head Coach of the Brentwood Girls Volleyball team, thought that all the teams in the tournament did a good job.

“This was the 28th annual edition of the Brentwood Invitational and it lived up to the overall history of this tourney as being a tournament with a very competitive field of teams, year after year,” said Porter. “A lot of volleyball players have been here through the years including Annette Buckner and Jenny Johnson. Misty May even played here years ago. This years field of athletes simply added to the legacy of the tourney and it was a fun weekend of quality volleyball.”

Billy Allen, Head Coach of the Pacifica Christian Girls Volleyball team, thought that his team played “consistently great” the entire tournament and that star outside hitter Grace Minchin stepped up even though she was injured.

“It was a great effort all the way around,” said Allen. “If we had played at this level all year, it would be great. We’ve been battling a few injuries that I thought would affect us more then it did but Grace stepped up and wanted to play and said, ‘don’t take me out’ and she played great in the finals.”

Minchin was awarded MVP of the Brentwood Volleyball Tournament and Kiani Lane and Gen Hook were awarded spots on the prestegious All-Tournament team.

Outside hitter Hook thought she performed well at the Brentwood Volleyball Tournament.

“I thought I played pretty well,” said Hook. “I’ve gotten a little bit better at passing but it comes in waves. Throughout the tournament I was doing pretty well and then I’d lose it and other teams especially Mayfield keyed in on that and started serving to me several times in a row and that kind of freaked me out but I am proud of my progress.”

Archer played well even though they are in a higher division.

“Getting the win against a top-ranked Division 1-A school like Notre Dame is just a huge victory for our team and our program as a whole since we’re Division 4-A,” said Archer Volleyball Head Coach Jonathan Lotz. “One thing about our team is that we never roll over; we always manage to dig deep and find something within ourselves to get back up after we’ve been knocked down. Our star libero, Lindsey Levesque, really exemplifies that spirit. She dove so hard after a ball that her jersey ripped and her elbow started bleeding, but the very next play she was back in and flying all over the court again.”

For her efforts, Levesque was awarded a spot on the All-Tournament team.

Even though Notre Dame lost to Archer, they still held their own against the other teams and tied with Brentwood to place third in the Brentwood Volleyball Tournament.

Below is a rundown of the Saturday playoff games of the Brentwood Volleyball Tournament with scores and top players.