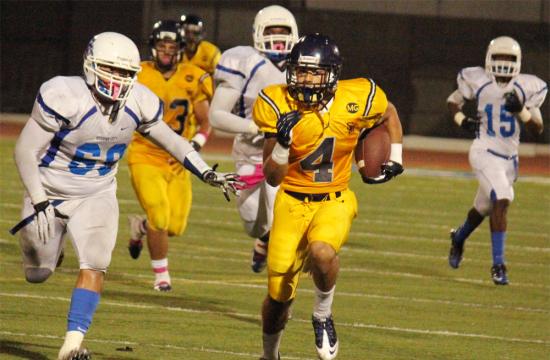 The Santa Monica High School (5-3) football team has been waiting for a leader to step up, and it took until the second half against league rival Culver City (4-4) for quarterback Ryan Barbarin to take the initiative and lead his offense to a Viking victory Friday night.

The Vikings are now tied for first place with Inglewood (6-2) at 3-0 in the Ocean League.

In a tale of two halves, Barbarin spread out his targets in the second half adding two passing touchdowns in a touchdown-less game where his passing attack had been initially shut down by the Centaurs.

The first half saw the Vikings relying on the strong punts of Denicio Gonzalez-Drake to bail them out of numerous fourth downs only to have Culver City punt the ball straight back.

Only Centaurs Anthony Caiseros found the ability to add points to the empty scoreboard with his 34 yard field goal late in the first quarter to make the game 3-0.

Yet a taste of what was to come came near the end of the first half when Vikings running back Russell Revis seemingly scored an 81-yard touchdown.

“The funny thing about it is that right before the play the offensive line told me get ready to score and I listened to them,” said Revis. “We were all on the same page and I saw eye to eye with all of my linemen.”

But the touchdown was called back and the half ended four minutes later with the Vikings down to the Centaurs 3-0.

But in the second half, the momentum of the game shifted in favor of the Vikings with Barbarin connecting early in the third quarter with wide receiver Sebastian LaRue who out sprinted the Centaurs defense for an 85-yard touchdown.

It was then that a look of composure seemed to fill Barbarin’s face, and he looked to be in command of the Vikings offense meticulously checking the defense before hiking the ball.

Vikings Head Coach Travis Clark was proud of the way Barbarin and the Vikings “stepped up” their play against Culver City.

“He’s been struggling a little bit of late and has had a tough time in practice,” said Clark. “But that kid came out and threw some balls right on the money.”

With a confident Barbarin at the helm, things seemed to get easier for the Vikings and they scored their second touchdown of the night off of a 48-yard screen pass to Revis late in the third quarter.

“The linemen knew how sad I was after the first touchdown got called back so they made me a promise on the sideline right before the play happened,” said Revis. “Once again, I put my faith into my linemen because they never disappoint me and over the last few weeks I have grown a bond with my linemen.”

After the Centaurs drove down the field only to miss their second field goal attempt of the game, the Vikings were given another opportunity to score off of a defensive pass interference penalty called on deep slant pass from Barbarin to wide receiver Jason King.

This advanced the ball to the Centaurs 30 yard line, and after a few rushes by Vikings running back Yachal Butler, the Vikings were deep inside Culver City territory.

On fourth and one, Clark decided to have Gonzalez-Drake get a shot at a field goal attempt.

The gamble paid off and Gonzalez-Drake tacked on a 24-yard field goal, to set the final score at 17-3.

Throughout the night, the Santa Monica High School defense held strong and kept the Centaurs out of the end zone.

“It was just a team effort,” said Clark. “My coaching staff and everybody did such a wonderful job tonight. It was a great week and we’ve been getting better and better.”

Next game for the Vikings is away against Inglewood Friday, Oct. 26 on Coleman Field at 7 p.m.