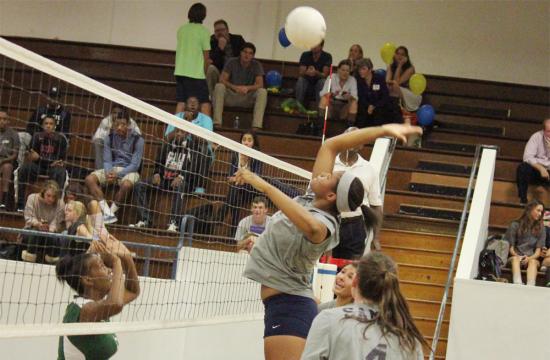 Santa Monica High School’s opposite hitter Wiktoria Surowka, who is from Poland, thought that the Vikings had a “really good day.”

Perhaps the only reason why the Sentinels even broke into the double digit category during the third set was because Santa Monica Volleyball Head Coach Liane Sato decided on giving her entire bench ample time to play.

“I’m glad they got some playing time just as we do,” said Surowka. “It was really great to see the future of Samohi volleyball just be there and win for us as well.”

But the Vikings can be defeated.

The Vikings just came off of a non league loss to Windward (8-2 14-7) in the Marborough Tournament 2-1 in the championship match.

Yet the strike does not tarnish Santa Monica High School’s undefeated 2012 record due to CIF rules regarding tournament play.

It just served as a reminder to the Vikings that good teams can beat them on a bad day.

But on a good day, the Vikings look pretty unstoppable as they continue their march towards the CIF playoffs and possibly winning a CIF championship ring.

“The other two best teams are Beverly Hills and Culver City,” said Surowka. “But I am pretty sure that we still have a really good lead on them when we play. They don’t really pose a threat, but I think if they were a little more focused they could be up there with us.”

Next game for Santa Monica High School is a rematch away against league rival Culver City Wednesday Oct. 24 at 3:15 p.m.

Next tournament for the Vikings is the Redondo Power Classic Tournament in Pool 7 against teams Long Beach Poly, Ventura, and El Segundo along with Pool 8 teams El Dorado, North Torrance, La Canada and Royal away at El Segundo this weekend starting on Friday, Oct. 26.