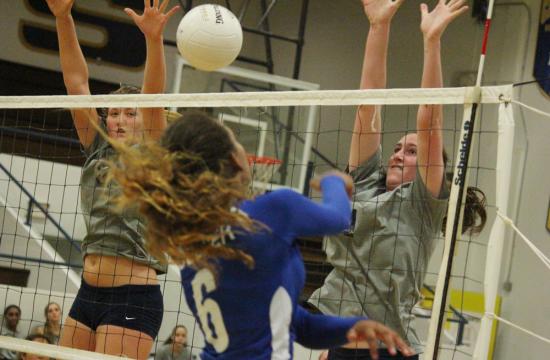 Even without star setter Blossom Sato, the Santa Monica Vikings (3-0) volleyball team pulled off a win against rival Culver City (8-10) in three tight sets 25-22, 25-14, and 27-25 showing off a kill factory that will only add muscle and confidence to their season.

Joslyn Hayes and Jordan Levy had nine kills a piece while Wiktoria Surowka had eight kills including the game-winning 27th point in the third set, and in the process humbled a solid Culver City team.

Culver City High School Volleyball Head Coach Joe Manzo thought that the Vikings did a great job in the game.

“Santa Monica always seems to have a great team however I have a feeling with us being lucky and Blossom not playing that helped us out and was to our advantage,” said Manzo. “We have to come back stronger knowing she is going to be in next time we play them with their setter and we have to be more consistent with our down ball digs.”

Sato was replaced by junior Mary Gurguis for the Culver City game as she had a sprained ankle but hopes to return in the following games.

“Our starting setter was injured so we knew we had to adjust to who we had and as a hitter it was difficult to adjust,” said Hayes. “But I think we did a pretty good job overall with everybody meshing together and really seeing our opportunities.”

The first two sets the Vikings dominated the court with Hayes and Jordan Levy providing the majority of the kills with Avalon Lennon adding key shots for points from the middle of the court.

The third set was the closest at 27-25 with Centaurs Spencer Williams adding a number of kills in the third set, but the outstanding play of Surowka, especially at the end of the third set, powered the Vikings over the Centaurs.

A rematch between the Vikings and the Centaurs is set at Culver City on Oct. 24.

The Vikings next game is away against Inglewood on Tuesday Oct. 9 at 3:15 p.m.