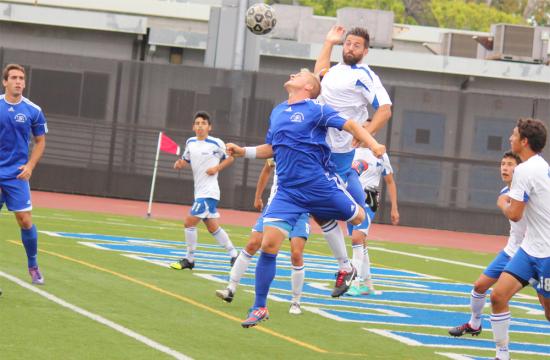 A late comeback in the second half was not enough for the Santa Monica College (8-3-4) men’s soccer team as they lost a close game against the Allan Hancock (8-3-4) Bulldogs in a Western State Conference match-up at the Corsair field Friday afternoon.

Santa Monica College Head Soccer Coach Tim Pierce was proud of the valiant effort his 10-man team had in the second half, but was disappointed with some of the calls the officials made against the Corsairs.

“Despite the officiating and the problems we were having in the first half, we had a great second half by scoring a goal,” said Pierce. “We created enough chances to at least tie the game back up but we were not finding the back of the net. Some days are just like that by struggling to score goals.”

In the 14th minute, the Bulldogs took a 1-0 lead when midfielder Christian Alvarez scored on a penalty kick after Corsairs midfielder Emmanuel Lopez slightly tackled Bulldog’s forward Seth Kena inside the box.

Pierce was upset with the call the referee made against Lopez.

“I thought the first call to be honest was a bad call,” Pierce said. “I thought our guy got plowed through and he was trying to clear a ball and they called a penalty kick.”

The Bulldogs continued to attack and scored just minutes after with a single-foot goal by forward Sean Greathead.

Corsairs forward Alessandro Canale broke away in the 28th minute with an opportunity to score but had a slight altercation with the Bulldogs goal keeper Erubay Ponce ensued after Ponce dove to save the ball.

Canale was handed his first yellow card of the game for attacking the goal keeper inside the box.

Midfielder Eric Fakhourian then received a yellow card just before half-time for disputing a call that he felt should have been in favor of the Corsairs.

In the beginning of the second half the Corsairs created plays offensively that were lead by Canale, but were unable to convert because they were called off sides on three consecutive attempts.

The momentum shifted in the 65th minute when Corsairs midfielder Luis Fuentes scored a goal that was deflected off of the goal post before bouncing in and the goal brought the Corsairs to within one at 2-1.

After the goal there was a two minute delay when trainers were called onto the field after goalie Ponce felt he was injured during the goal, but he turned out to be alright.

Both teams continued to attack with opportunities to score on both ends, but each team was quick to hustle back on defense.

Corsairs goalkeeper Danny Medina came up with two consecutive saves to keep the Corsairs within one around in the 70th minute.

Things took another turn in the 78th minute when Canale was handed his second yellow card of the game and was sent off the field after he shoved Ponce during his attempt to score.

Moments before, Ponce had shoved Canale but Canale was given the penalty, was issued a red card, and ejected from the game.

Even though the Corsairs were now down to only 10 men, they pressed the Bulldog defense and continued to create opportunities to even things up.

In the 88th minute, Corsairs forward Luis Fuentes had a chance to tie the game, but his shot attempt bounced off the top of the goal post and no goal was scored.

Five extra minutes was added to the clock and the game intensified as both teams fought to score another goal.

Corsairs defender Ricky Malmstroem stepped up defensively in the back line to keep the Corsairs in the game but despite the Corsairs best attempts to score a equalizer, time and luck ran out and the Raiders went on to win 2-1.

Pierce feels optimistic about the season even though they will be away for three conference games and will be without leading scorer Canale against Glendale for his ejection due to his red card received from the Allan Hancock game.

“We should be able to bounce back,” Pierce said. “Sometimes you don’t catch the breaks and you just have to react.” .

A three-game away road trip starts away against Glendale Tuesday, Oct. 23 at 7 p.m.