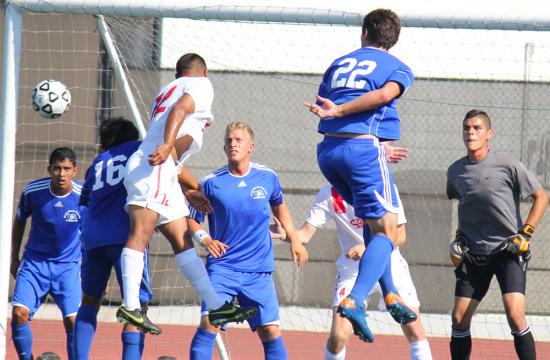 “Our defending on set-pieces is not good right now,” said SMC’s head soccer coach Tim Pierce. “We don’t have a commitment to win those balls and our soccer is decent throughout the game because we are scoring enough goals to win but we’re just letting up way too many.”

The Corsairs defense has been ripe with recent injuries and this gave them some troubles in the first half.

The Vaqueros capitalized on the injury-ridden Corsair defense and took an early lead with a diving header by freshman defender Ricky Lopez in the ninth minute of play.

During warm-ups the Corsairs goalkeeper Danny Medina strained his MCL but was able to re-group and start in the game.

The attacking offense of the Vaqueros continued to press and scored in the 37th minute off of a pass from sophomore forward Chijoke Aranotu to freshman midfielder Jamie Sporcic giving them a 2-0 advantage.

The Corsairs answered back in the 39th minute to cut the advantage to one with a goal from freshman midfielder Marvin Lemus.

With one minute left before halftime, Sporcic scored his second goal of the game to give the Vaqueros 3-1 lead.

Coach Pierce made a change to his line-up and had to go to his third-string goal keeper, freshman Josef Somera, in place of Medina due to Medina’s injury that had started to affect his play.

The Corsairs starting goal keeper, Kevin Alonzo, is recovering from a a dislocated elbow that occurred during a road game against Palomar.

The defense for the Corsair’s continued to struggle as freshman midfielder Kian Chachi scored off a second chance when his header was first blocked to give the Vaqueros a 4-1 lead.

Goals did not stop the Corsairs from getting back into the game in the second half and they continued to create plays offensively but were just not able to complete.

The last opportunity for the Corsairs came in the 85th minute when Freshman Forward Alessandro Canale was fouled by the Vaqueros, and Canale was able to convert on a penalty kick in the 85th to pull within two but that was not enough as time ran out and the Vaqueros pulled off the victory 4-2.

“I thought the second half we did great and our soccer was nice,” said Pierce. “We were moving the ball well and we are a good passing team but our big problem is defensively. I thought we played out played the other team as far as possession goes.”

The next game for the SMC Corsair’s Men’s soccer team will be away against Citrus College Friday at 3 p.m.