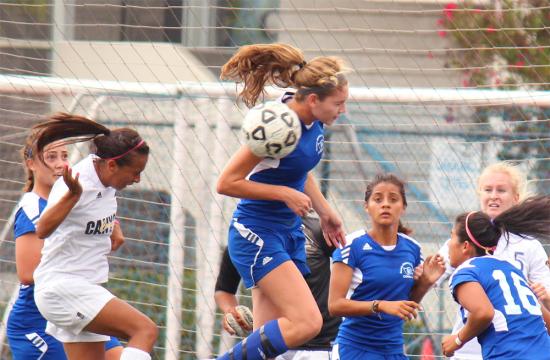 Santa Monica College (7-2-5) soccer forward Meg Pierce led the charge for the Corsairs with a solid second half performance against undefeated Canyons College (12-0-3) scoring two goals in a game that that resulted in a 2-2 tie that is sure to give the Corsairs a strong standing in the Western State South Conference at home Friday afternoon.

Goalkeeper Cindy Godina and defenders Briana Mackey and Carrie Markwith contributed strongly and didn’t allow the Cougars to score any points in the second half.

Santa Monica College Women’s Head Soccer Coach Aaron Benditson made a few changes after coming into the second half with a 2-0 deficit to give the Corsairs the opportunity to score and pull off a tie late in the game against Canyons.

“Once we took our second goal and we were down 2-0, I had to make a tactical change,” said Benditson. “So instead of a four four two formation, we committed more numbers forward. It’s high risk high reward, and in soccer sometimes it works and sometimes it doesn’t. Today it worked.”

The Corsairs have only lost one game during league play to Citrus College (11-1-2) and Canyons has been the only team to beat Citrus College the entire season.

Justin Lundin, Head Coach of Canyons College, was disappointed with the Cougars performance Friday afternoon and believes his team should have won.

“I give Santa Monica a lot of credit,” said Lundin. “They came out and they worked really hard and put us under a lot of pressure and did what they needed to do. I think the tie was a good result for them.”

During the first half it was all Cougars with forwards Brittany Sayre and Katie Colleta cracking through the Corsairs defense and scoring to put Canyons up 2-0.

In the second half, the Corsairs solidified and stopped the Cougars advancement, and with 18:41 left to go in game, forward Meg Pierce scored on a penalty kick to put the score at 2-1.

The Corsairs battled it out for the remainder of the time with Pierce scoring her second goal with 5:38 left on the clock to tie the game at 2-2.

Benditson was proud of his team’s ability to come back from behind to tie the game against Canyons.

“It doesn’t get any better then that and it’s why we are all around the game,” said Benditson. “We are here to watch teams have good reactions to going down and stay committed to the plan and committed to the team, and I thought our girls really did a nice job of that today.”

Next game for the Corsairs is away at Citrus College on Tuesday, Oct. 23 at 4 p.m.