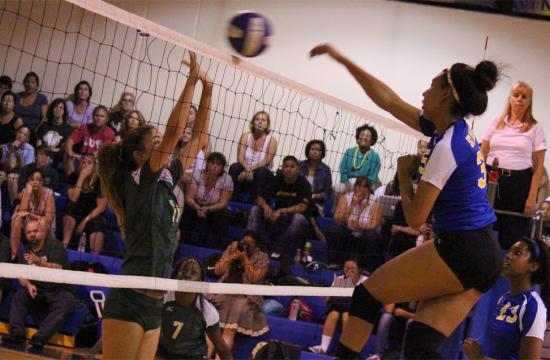 Ken Hamato, assistant head coach who led the Vikings Thursday night, felt good about the victory after his team lost 3-1 against the Mariners early in October.

“We changed the line-up a little bit to what we did last time,” said Hamato. “Last time we played St. Monica’s, Tyler Spriggs was on the outside and this time we moved her to the middle. So that was the main adjustment we made this time around.”

The Mariners have had a tough week of play with recent losses to Pacifica Christian (12-0) and Cantwell-Sacred Heart (5-6) but are still tied for first place in the El Camino Real league with St. Paul with both teams league records at 4-2.

Mariners Head Volleyball Coach Brenda Gonzalez thought that “a couple simple errors” were the main factor between winning and losing to St. Bernard this time around and seemed satisfied that the Mariners “were trying,” to win the game.

Gonzalez thought that the difference in the second meeting between the two Catholic high schools was how the Centaurs adjusted to the Mariners noting the exceptional play of the Vikings Aryn Clay and Tyler Spriggs.

“I think Aryn helped them out defensively and passing wise,” said Gonzalez. “I think that’s what allowed Tyler to get set more often and give her more control.”

Spriggs racked up 22 kills using her height against the Mariners smaller middle, while libero Cherise Montgomery helped the Vikings control the ball with 19 digs.

The most intense volley came during the end of the second set with Mariners outside hitter Dominique Booth slapping down a kill to tie the game at 25-25.

But Spriggs came back with a kill of her own to put the Vikings up 26-25, and on the next volley a two touch error by the Mariners capped the second set in favor of the Vikings 27-25.