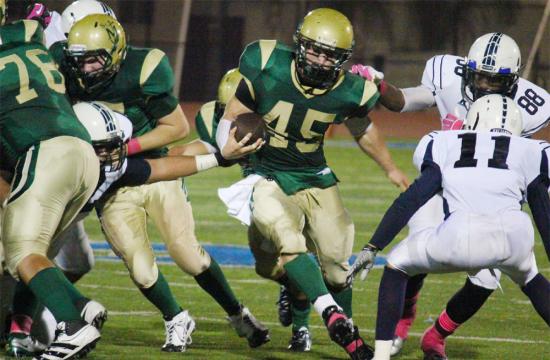 It was a ground war Friday night with St. Monica (5-2) outrushing St. Genevieve (5-2) in a pound for pound crunch for crunch football game with the Mariners ultimately pulling away with the victory 33-21.

St. Monica’s Head Football Coach Adam Guerra thought that the Mariners had an all around good game against a worthy opponent.

Kick off returner Melvin Wilson started off the game returning the ball for 50 yards to put the St. Monica Mariners in excellent field position.

The Valiants responded with running back Anthony Blue breaking free on a rush and outrunning the Mariners defense for a 70 yard touchdown to tie the game 7-7 in the first quarter.

Mariners running back Keven Holubowski made his presence known leading the next drive with a 32 yard rush that culminated with a two yard touchdown to put the game at 14-7.

From there the Mariners broke away in the second quarter on a 16 yard rushing touchdown by Pegnato to put the score at 21-7.

The Valiants were never able to recover from the blow in the third and fourth quarters even though they traded scores with the Mariners.

Once the rushing game of Pegnato and Holubowski began to eat up the clock, along with a 53 yard punt return by Wilson for a touchdown, the Valiants never stood a chance at recovering the game.

Guerra thought that lineman Angel Galdamez had a good game and created holes for the Mariners running backs to rush through.

“He’s a captain and a strong side tackle, and we run behind him a lot,” said Guerra. “He had a great game.”

St. Genevieve Football Head Coach Brent Huff thought his team could have had a better game even with workhorse rusher Blue picking up 161 yards on 20 carries and adding two touchdowns to the Valiants tally.

“In the first half they were running the ball very well and we weren’t doing a great job tackling,” said Huff. “It was close at the beginning but they began to pull away towards the second quarter. In the second half, we just tried to come out and play some good football and do a better job tackling.”

Both Holubowski and defensive back Lawrence Major were injured in the game but Guerra hopes the injuries aren’t too serious.

“We don’t know right now,” said Guerra. “Maybe a knee and an ankle but we’ll get them checked out and hopefully it’s just a tweak right now and we’ll get them back next week.”

Next game for the St. Monica Mariners is away against St. Anthony on Clark Field Oct. 12 at 7:00 p.m.