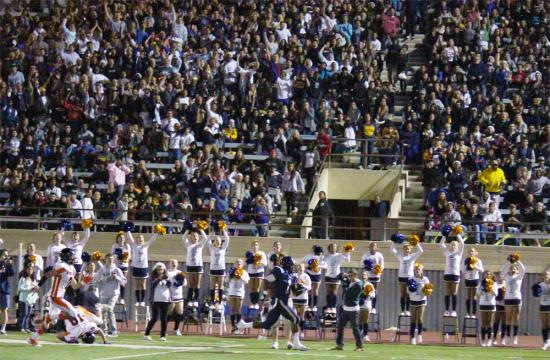 Santa Monica High School’s (4-3) offensive line rose to the challenge Friday night leading a homecoming victory against Beverly Hills High School (1-6) while the defense shut down the Normans offense 24-0 in a ground war that painted the Normans blue and gold on the Corsair Field lifting the Vikings to 2-0 in league play.

The Vikings now boast a two game winning streak after defeating Morningside last week 35-20 that came on the heels of three straight losses earlier in the season to football heavyweights Mater Dei (6-1), Valencia (4-3), and Hart (6-1).

Vikings Head Football Coach Travis Clark was proud of the way the offensive line of the Vikings responded to the Normans defensive challenge.

“Tonight was an offensive line game,” said Clark. “Our offensive line kicked butt. They really dominated and I am surprised because Beverly Hills is bigger then us up front. Our boys just played great and won the game in the trenches.”

Vikings running back Yachal Butler rushed for 121 yards and one touchdown to power the Vikings to victory.

“We came out with a good game plan and we wanted to establish the run really early,” said Butler. “It all depended on the offensive line. They did what they had to do so I just rewarded them with yardage.”

Clark believes that Butler has performed well in the last two games.

“Yechal Butler has been having a great two weeks,” said Clark. “He kind of finished the game off last week against Morningside in the fourth quarter and he’s just getting more comfortable with what we are trying to do with running the ball. He has great vision with great feet and I’m really proud of him.”

Santa Monica High School struck first on a four yard rush by Butler to put the Vikings up 7-0 without any response by the Normans, and by halftime the score was 10-0.

Wide receiver Sebastian LaRue sprang to life in the third quarter weaving through triple coverage after catching a ball at the line of scrimmage at the Vikings 30, and outraced the Normans defense for an apparent touchdown only to have it called back to the Normans 30 on an unsportsmanlike penalty called on the Vikings.

LaRue and the Vikings were still awarded with a 40 yard advancement.

Vikings running back Russell Revis scored a few plays later on an eight-yard up the middle strike to put the Vikings up 17-0.

Late in the fourth quarter, Vikings defensive back Tremaine Taylor scored on an 81-yard interception return to effectively end the game at 24-0.

The next game for the Santa Monica High School Vikings is at home against Culver City Friday at 7:00 P.M.