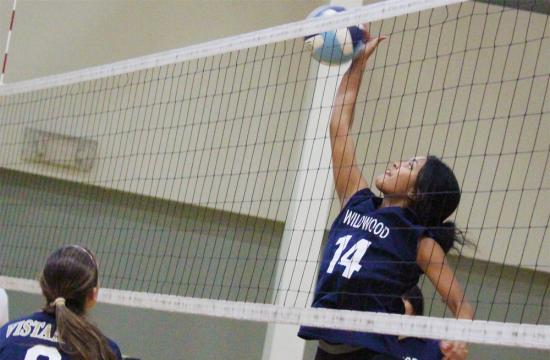 The Wildwood Wolves are rebuilding their team this year with Volleyball Head Coach Nick Scheftic, and are winning some games in the process regardless of the fact that there are only four upper classmen on the team.

Scheftic was proud of the way his team played against Lighthouse Christian.

“It was a great overall effort from the team,” said Scheftic. “Carly Rosenberg stood out and had some great digs and spikes. Paola LeVarrat had a good consistent effort passing and Romy Reiner had some good defensive spikes. Aethena Brooks came in the game in set three and served three straight important points.”

Scheftic is a six year pro and an ex USA national team player who played on the 2006 national championship team at UCLA and hopes to improve the play of the Wolves in the Coastal League.

Scheftic is hoping that Wildwood will make a big presence in the Coastal League and will be able to win the league crown in the future.

“I continue to tell the girls to stay confident and keep trying work on the things that we have been working on for such a long time,” said Scheftic. “It’s a little late in the season but we are improving on little things and I think that we do have a building year this year. I also think that in the future we will be a pretty good team.”

Sophomore team captain Carly Roseberg and freshman Romy Reiner are a big forces for the Wolves and prospects to lead the Wildwood Wolves for the next couple of years.