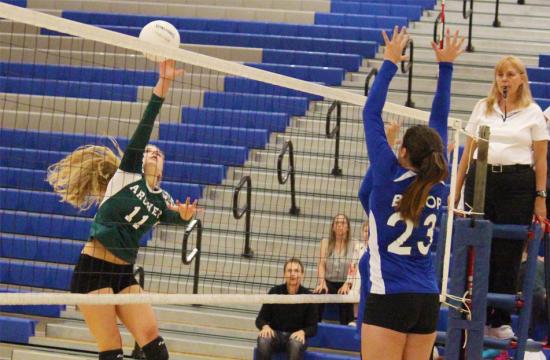 The Archer Panthers (15-3) defeated the Bishop Broncos in the first round of the CIF Southern Section playoffs in volleyball winning all three sets 25-15, 25-14, and 25-18 at Santa Monica College Tuesday night before beating Vistamar on Thursday night.

With the two wins, the Panthers advance to the CIF quarterfinals.

Senior defensive specialist Marian Maille went on a 10-0 serving run scoring five aces during the first set against Bishop to set the tone for the rest of the game against the Broncos.

Panthers volleyball head coach Jonathan Lotz thought that the win against the Broncos was “a good opening round for us.”

Archer’s outside hitter Maia Barnett added ten kills to solidify the victory against the Broncos.

Archer won round two of the CIF playoffs away against Vistamar Thursday night besting the Vikings in five sets winning the first two sets 25-16, 25-23 before losing the next two sets 25-23 and 25-22.

The Panthers pulled off the victory in the fifth set 15-10 at Dana Middle School in Hawthorne.

“It was a real battle,” said Lotz. “Vistamar fought to the end but our girls came back and won game five.”

Next game for Archer is against the number one seed Pacifica Christian (15-1) at Crossroads High School Saturday at 5:00 p.m.