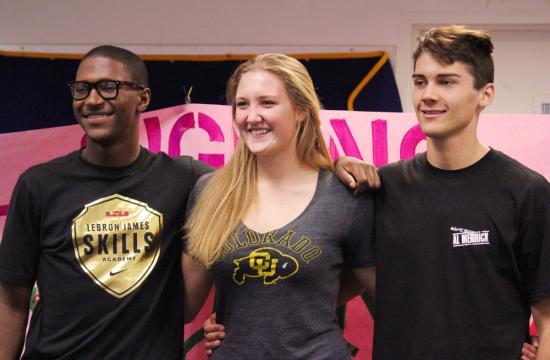 Both the girls and boys volleyball basketball teams along with their respective coaches cheered on their leaders as they signed contracts committing to play sports in college in return for full athletic scholarships.

Keckin thinks that attending college in Hawaii will be “really fun.”

Keckin has been starting on the varsity squad for the Vikings in volleyball since his sophomore year and he was awarded All-CIF in 2010.

“I was the youngest player on the team and I really had to step up my game,” said Keckin. “I had a lot of weight on my shoulders and I had to get as good as I could as fast as I could. I received a few letters before I decided to go to the University of Hawaii, and this pushed me to get to the highest level I could get to.”

Hayes played as a middle blocker and as an outside hitter for the Vikings in volleyball and could be seen frequently pounding the ball and scoring numerous kills in matches.

Hayes was proud of leading the Vikings to the CIF Semi-Finals this year.

“We had a great season and I couldn’t be more proud of the team I have gotten to play with the last year,” said Hayes.

Hayes felt that the University of Colorado at Boulder will be the right place for her to go to college.

“When it feels right it feels right,” said Hayes. “As soon as I started to get to know them, I knew this was a team that I wanted to be a part of.”

Matthews started on the boys varsity basketball squad as a junior and frequently wowed crowds during the 2011-2012 season with his high point performances and dunks leading the Vikings to a 20-9 overall record going 9-1 in the Ocean League.

Matthews was chosen to be the MVP of the Ocean League for the 2011-2012 basketball season while still a junior at Samohi.

Mathews averaged 22.4 points a game with a 42-point high and played a large factor in the Vikings Ocean League Championship and advancement to the third round of CIF this past season.

“I’m excited to play basketball in college on an athletic scholarship,” said Matthews. “But I am looking forward to playing basketball this season at Samohi.”

“It shows that if you really put in the hard work, it will pay off in the end,” Matthews said.