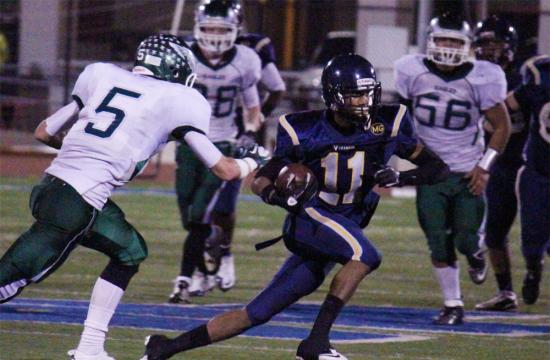 With the win, the Vikings advance to round two of the playoffs.

Vikings Head Coach Travis Clark was proud of his receiving core that was led by King and Sebastian LaRue.

“When we sent Sebastian deep, they put three guys on him and they left Jason one on one so he’s got to say thank you to Sebastian for giving him these opportunities,” said Clark. “But obviously you’ve got to take your hat off to Jason because he’s making the play.”

King was happy that he came to Santa Monica High School because he knew he was going to make “a lot of easy touchdowns.”

“I knew other teams would be defending Sebastian way harder,” said King. “And I try to take advantage of the single coverage every game.”

LaRue has known King since they were young and is happy for King’s current success on the football field as a Viking.

The Vikings went up 7-0 in the first quarter with quarterback Ryan Barbarin connecting with King for a 42-yard touchdown.

In the second quarter, Barbarin found King again this time connecting for a 34-yard touchdown with Vikings running back Yachal Butler spearing a two-yard rushing touchdown to make the game 21-0.

Vikings kicker Denicio Gonzalez-Drake kicked a 25-yard field goal to end the half 24-0.

King started up the second half by scoring his third touchdown of the night in the third quarter off a short pass from Barbarin before he juked a few Eagles before and was off to the races en route to a 65-yard touchdown to make the game 37-10.

King then intercepted the ball on defense and ran it back for 68-yards for his fourth touchdown of the night to put the game away at 44-0.

King piled up 154 yards on four receptions scoring three touchdowns on offense and added a 68-yard interception for a touchdown on defense.

Meanwhile the rest of the Vikings defense played solid not allowing the Eagles to score any points by shutting down their vaunted running game and keeping them out of the red zone.

Clark will now be preparing the Vikings for round two of the CIF Southern Section playoffs away against Serra (9-2) Friday, Nov. 16 at 7:30 p.m. at Junipero Serra High School.