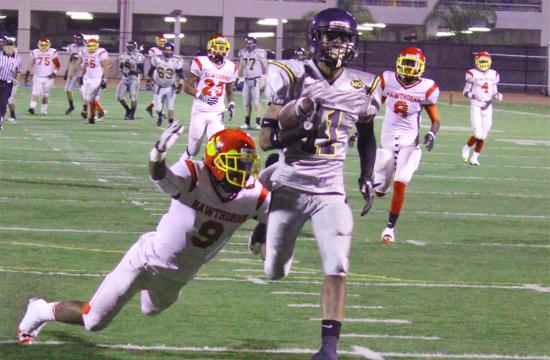 The Vikings are the champions of the Ocean League with a record of 5-0.

Vikings Head Coach Travis Clark has been working on getting ready for the playoffs since Mater Dei making sure the Vikings are ready for the upcoming challenge.

“We don’t take anybody lightly,” said Clark. “I don’t care if it’s a third place team or a second place team, everybody is capable of winning. That is why they are in the dance.”

Against the Cougars, the Vikings went up 14-0 with wide receiver Jason King scoring a 42-yard touchdown and a 60-yard touchdown off passes by quarterback Ryan Barbarin.

“I had to make sure I came out here to support my team,” said King. “Coach Clark gave me a grip of opportunities tonight for the two passes he called for me and I just took advantage of it all after the catch.”

King’s third touchdown to put the Vikings up 21-0, came off an 80-yard interception return to lead the defense in the first quarter.

Barbarin then picked apart the rest of the Cougars secondary on scoring aerials to his other targets that found wide receivers Sebastian LaRue open for a 20-yard touchdown, Trent Hill for a five-yard touchdown, and Nick Cardiel catching an eight-yard touchdown.

By the middle of the third quarter, Clark began to put in the second and third string Vikings to give them a chance to play and gave his starters some needed rest.

“The whole team played together tonight,” said Cardiel. “I was able to score a touchdown by following my line and my lead blocker.”

Next game for the Vikings is in the first round of the CIF playoffs against the Templeton Eagles (7-3), third seed of the Los Padres league, home Friday night at 7:30 p.m.