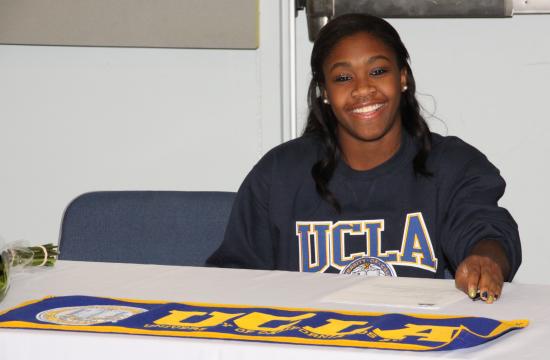 For the third consecutive year, Vistamar School will have a student-athlete sign a Letter of Intent to join a Division I university athletic program.

The six-time NCAA National Championship UCLA Gymnastics team, under the direction of Coach Valorie Kondos Field, will be welcoming a new member to the Bruin Family.

Senior Hallie Mossett, a gymnast from Redondo Beach, participated in a signing ceremony today, Nov. 16 to begin her freshman year at University of California Los Angeles in September 2013.

Mossett has been a gymnast in Los Angeles since the age of five and has amassed an impressive list of accomplishments.

In addition to 10 California State Championship titles, she earned a spot on the TOPs National Team for four consecutive years and was the first US Challenge Hopes National All-Around and Beam Champion.

Mossett moved on to elite status at the age of 11 and is a two time US/American Classic Floor Exercise Champion, has held multiple VISA National Championship placements, was a three-time US National Team member, and a member of several winning international assignment teams including the first place US vs Japan team, first place Gymnix team and was named as an alternate on the 2011 Pan American Games Team.

Unfortunately, she suffered untimely injuries that prevented her from participating in the 2012 Olympic trial process but has plans of returning to competition in 2013, joining UCLA in the fall, and hopefully training for a World’s team birth in the future.

Mossett, known as a triple threat of grace, beauty and power, trains at West Coast EliteGymnastics in Arcadia under the skillful leadership of elite coaches Fernando Villa and Toni Angelova (former Bulgarian National Team gymnast), who have been her coaches since she was seven years old.

She is looking forward to bringing her specialty, the floor exercise, to UCLA and becoming an enthusiastic Bruin.

The School draws student from 60 schools and zip codes in the greater Los Angeles area with 40 percent of qualified families participating in its Moderated Tuition Program.

The Vistamar mission rests on challenging academics, active learning and a diverse community. An interdisciplinary curriculum encourages critical thinking, strong analytical and communication skills, and a global perspective for a mature understanding of the world.

Vistamar graduates have been admitted to more than 300 colleges and universities in the US and abroad.