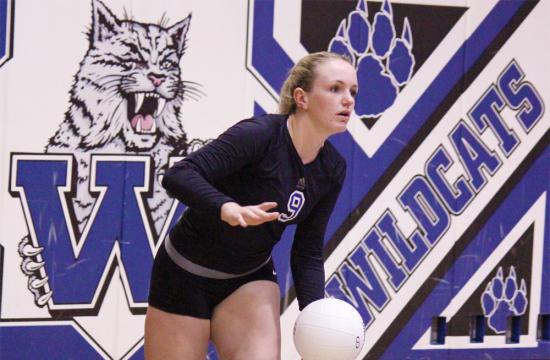 The Windward Wildcats Volleyball team are still alive in the state playoffs and have crossed into another phase of their 2012 season this time playing in the Southern California Regionals of the California State Volleyball Championships tournament beating Hoover 3-1 in Fresno Tuesday, Nov. 20.

According to Windward Head Volleyball Coach Michelle McGuire, the team “boarded the bus with high aspirations” and have continued their season another week despite an earlier loss in the CIF Championship game to Rim Of The World on Nov17.

“While the team had set their goal on reaching the state tournament, they had not expected it to begin in Fresno,” said McGuire.

Windward won against the CIF Central Section Division III Champions who were seeded number four in the state draw.

“In front of a rowdy crowd in a packed gym at Hoover High, the Wildcats jumped out to a 7-1 lead in the first set,” said McGuire. ” Hitters Christina Cornelius and Asha Walker mixed up their shots and libero Alex Saghian and defensive specialist Madison Peach kept the ball in system.”

McGuire also noted the outstanding play of senior Kelly Kirshner who stepped in to play outside hitter and “did well keeping the ball in play,” and sophomore Saghian who “served well” for the Wildcats.

According to McGuire, set three was “more of a challenge” as the “Hoover hitters got hot” and “Windward’s dig to kill ratio slipped off,” but the Wildcats bounced back with a solid fourth set to win the match and advance to the next round of the state tournament.

Next game for the Windward Wildcats is away against Cathedral Catholic in San Diego Saturday, Nov. 24 at 7 p.m.