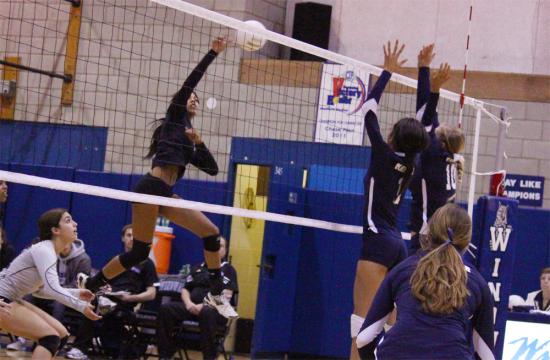 Windward volleyball won its quarterfinalsmatch against Mayfair in three sets 25-15, 28-26, 25-19 wowing the home crowd with a second set comeback at the Jackson Center Saturday night.

With the win, the Windward Wildcats advance to the CIF Southern Section semi-finals.

The Wildcats came out strong winning the first set against Mayfair 25-15, but in set two the Monsoons struck back going up 24-15 before Windward came back to win set two and then claiming victory in set three for the sweep.

“We were down 24-15 with no timeouts,” said McGuire. “But then the Wildcats went on a tear behind the serving of senior Ashley Smith.”

Asha Walker had seven kills in the second set to power the Wildcats past the Monsoons.

McGuire was amazed at the second set comeback.

“It is rare to see a team come back that far at set point,” said Head Coach Michelle McGuire. “But it was a total team effort tonight. When you can use 12 players to get the job done, that tells you something about the chemistry and character of this team. I am very proud of them.”

McGuire singled out sophomores Tae Butler and Christina Cornelius as keeping the offense going along with Smith and noted the outstanding setting of Hannah Holmes and Ruby Wilkes.

McGuire also credited sophomore libero Alex Saghian from keeping the ball “off the floor and in system.”

Windward will host Santa Monica High School Tuesday for the semi-finals at the Jackson Center with the time TBA.

Check back at smmirror.com for details as they become available.