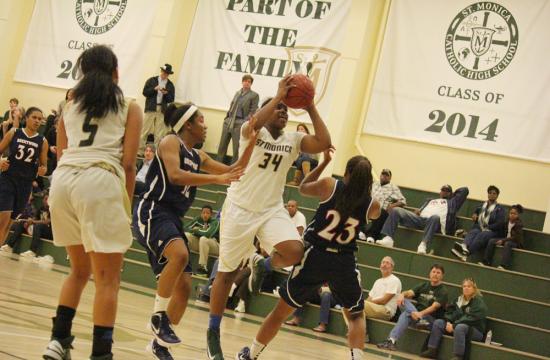 St. Monica Girls Basketball Head Coach John Skinner thought that the flow of the game between the Mariners and the Eagles “was very choppy,” Tuesday night even though the Mariners won the game against Brentwood.

“I thought that the way the game was called, there was no way any team could ever get into rhythm,” said Skinner. “There was a lot of start and stop as both these teams liked to run and get it up and down the floor so we had to really focus on subbing to keep the players from fouling out.”

St. Monica took an early lead going up 9-2 after a basket by Elena Kostadinov with Harris extending the lead to 18-6 on a layup.

But the Eagles rallied back in the third quarter and took the lead 20-18 after Martin blocked Harris and then raced down the court to score.

A steal and bucket by point guard Drew Cabral put the Eagles up 22-18.

Brentwood held the lead at 28-25 after Harris missed a shot while driving to the net through the Eagles defense in a play that sent Skinner to the floor, and he remained there on his back for a few moments covering his eyes in protest over what he believed was a bad call by the referees.

“He’s always fired up and he gives us energy,” said Harris. “So when he is all into it, we know that we need to pick it up.”

Yet Skinner felt that once Briana calmed down on the court in the second half, the Mariners were able to pull ahead.

“Briana got frustrated in the first half because she felt like she was getting hit a lot and that the fouls weren’t really being called,” said Skinner. “She really turned around in the second half and she slowed down and got her footwork. Once she gets her feet set, she’s one of the best shooters in Southern California.”

In the fourth quarter, Harris looked unstoppable as she drove up through the top of the key splitting the double team defense of Brentwood’s Martin and Aminah Reid-brydon to lay in a bucket to tie up the game 30-30 before adding another layup to give the Mariners the lead 32-30.

On the Mariners next possession, Harris sunk a three point shot and then a hit another bucket to make the game 39-32.

“In the first half, I wanted to go hard because I remembered them beating us last year so I wanted revenge,” said Harris. “In the second half, I figured that if I am going so fast I wasn’t going to get anything done so I had to slow down and pace myself during the game.”

Thursday’s games are as follows:

Check back at smmirror.com for updates and scores of the St. Monica Winter Tournament