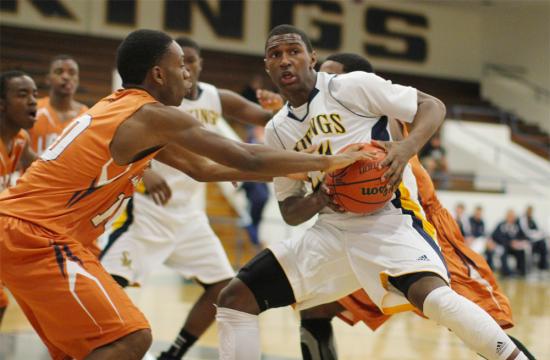 Santa Monica High School (2-0) blew out Legacy (6-1) 78-51 in a game where the Vikings were in control of the entire game with guard Jordan Matthews and forward Chris Smith combining forces to score as many points as the entire Longhorn offense put together at home Saturday afternoon.

“I feel like we did good today,” said Smith. “We passed the ball a lot and were communicating well on defense.”

Samohi guard Troy Maloney started off the night hitting a three with forward Smith going up unchallenged to the basket for a layup.

Vikings guard Matthews hit his first three shots, including a three pointer, to give the Vikings a commanding 12-3 lead.

Before Legacy knew it, they were down 18-5 in the first quarter and, after a small comeback, the Longhorns could only muster a handful of points before going into the second quarter down 24-11.

The Vikings started to put in their reserves in the second quarter affording the entire Vikings bench playing time, and the Longhorns managed to cut the lead down to ten at 44-34 by the middle of the third quarter.

But by the end of the third quarter, Vikings guards Matthews, Trevis Jackson, and Erron Vaughn worked well with the Vikings offense to hold the Longhorns at bay and then scoring to go up 58-39.

In the fourth quarter, with the starters benched again, Jonah Matthews came in to lead Samohi’s reserves sinking a pair of three point shots to add to the final score tally at 78-51.

“It was a good win,” said Smith. “We have our down moments but we always fight through it and we just play good as a team.”

In preseason tournaments, the Vikings have gone 6-2 with their first regular season win against Palos Verdes Penninsula 74-62 on Thursday.

Next game for the Vikings is away against La Jolla Country Day Saturday, Dec. 22 at 2 p.m.