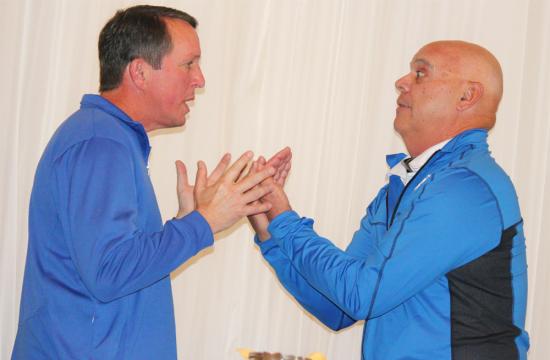 Professional Tennis Coach Wayne Bryan has waited for over a year to say what he needed to say to the United States Tennis Association (USTA) about its U10 Tennis mandate that came into effect in January of 2012.

Bryan, father and tennis coach of the Bryan brothers, challenged the “green ball mandate,” in a forum packed with tennis coaches and interested parties that flew in from as far away as Arizona just to speak their minds along with Bryan at the “Riv It Up” USPTA Education Event held at the Riviera Country Club in the Pacific Palisades Sunday, Dec. 1.

Along with Bryan at the event were USPTA professionals who listened to arguments presented by USTA Board of Directors member Craig Jones who sat at the head of a forum table along with Bryan, Riviera Club Director of Tennis Andrew Minnelli, and the Tennis and Ski Channel’s Steve Bellamy.

The U10 Tennis Mandate states that “modified courts that are similar in size than the 78-foot courts” must be used for tournament play.

New rules also mandate the use of “low compression tennis balls that move slower through the air and bounce lower” so the balls will be “better suited to the size and abilities of younger children.”

Bryan directed his argument at Jones centering his belief that the U10 tennis mandate is not helping to send the world of tennis in the right direction.

“Coaches and everybody is pissed at the mandate,” said Bryan. “Using a soft ball in a club is fabulous. You’ve used it and I’ve used it. I’m all for it. But I’m against mandating that no ten and under player can play regular tennis with a yellow tennis ball.”

According to Bryan, many kids and coaches still want to play with a regular tennis ball and feel as if the new rules are chasing away younger tennis players from entering and continuing inside of the world of tennis.

“You’ve crushed a whole bunch of kids across the country,” said Bryan. “In Texas, you are not even allowed to play up and the USTA says that it doesn’t matter that good tennis players play up. Yes it does.”

Jones defended the USTA’s decision on the mandate and believes that the decision made by the USTA helps kids improve their tennis skills rather then chasing them away.

“Teaching kids these days is dramatically different from before, say even ten years ago,” said Jones. “And reception skills are so poor these days in the average kid. It gets tough because you get a parent asking why their kid isn’t hitting balls.”

Pro-tennis player Josh Osswald offered a live and let live solution to the stand-off. “Why not just have two tournaments?”

But according to Jones, that is not an option and a dual tennis tournament would only complicate things.

Jones believes that the mandate, even if it is unpopular with some coaches, is meant to solve problems not create them.

“You can’t just leave it wide open,” said Jones. “That’s what governing bodies do whether it’s the local little league or swim league or what team goes to division one. You need to have some type of criteria and if you offer two of them the kids that have been playing in them are going to chose the other one.”

Yet Jones seemed to listen to the argument made by Bryan and the other concerned coaches even if he didn’t always agree with what they were saying.

“On down the road in my perfect world, I think there are a lot of tens, the really good ones, who could do it,” said Jones. “The problem is with all these kids playing up that have no business playing up.”

And quite simply, Bryan just wants to go back to the way tennis used to be so that a whole generation of American tennis players don’t get “screwed” by the mandate.

“There are hundreds of kids getting screwed by this,” said Bryan. “This stupid mandate that you got to use a green ball no matter how good you are. This will not stand.”

Bellamy, who acted as an intermediary between the two factions, offered his opinion on how a successful tennis player is shaped and molded.

“This is just a competition mandate,” said Bellamy. “I want the USTA to have everyone on their side and unify the sport. With a few things like the junior competition and the mandate, you get so many people away and divided against you.”

Bellamy believes that there are approximately 20-30 million players in the game today.

“In creating a tennis player, you need to create an environment that they want to be a part of,” said Bellamy. “It’s about those tangible things that really create their social structure.”

At the end of the heated discussion, even though neither side could agree with the other, both agreed that something needed to be done to improve the dwindling numbers of tennis players in the United States and that both parties were listening to what the other had to say.