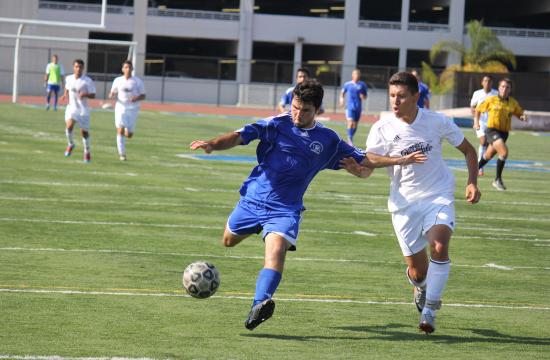 When the fall semester approached in 2012, Santa Monica College student athlete Alessandro Canale was faced with a tough decision: whether to transfer to San Francisco State or stay another year at SMC where he could continue to play soccer.

He had been accepted to attend San Francisco State in the fall, but Canale decided to turn down the offer just before the semester started after he found out he was ineligible to play soccer there as he did not fulfill its requirements.

According to the NCAA, students have to meet certain criteria to qualify. In Canale’s case, he needed to earn an AA degree in order for him to qualify to play at a four-year institution.

When the SMC men’s soccer team formed in fall for the first time in nearly 20 years, his decision to stay in Santa Monica grew stronger as he wanted the chance to play and prove himself as a player while fulfilling his requirements.

Born in Venice, California, Canale was exposed to soccer when he began playing club at age 12.

He continued to play throughout high school at Samohi and during his senior year, the team placed first in the CIF Div. IV. He was awarded the Ocean League Offensive Player of the Year and he helped lead the Samohi soccer team to the Southern California Regional Division I Championship with a 29-0-1 record and the team was nationally ranked #1.

Although his accomplishments did not earn him the recognition from colleges to play soccer, he decided that the best decision was to attend SMC and continue to play soccer in other leagues.

Canale did not have much time before the start of the soccer season.

The Santa Monica College men’s soccer team was already in pre-season and Canale had to pursue head coach Tim Pierce to see if he could join the team.

Pierce gave him the opportunity he desired.

“I knew his ability was always there having seen him play in the SMC soccer classes, but I wanted him to make a commitment to the team by working for the position,” Pierce said. “He established himself as one of the best players right away.”

Canale had kept up his game by playing with the Santa Monica Adult Soccer League since starting SMC in 2008 and also played in the Premiere Development League with the Pali Blues this past summer.

It did not take Canale long before he was able to prove himself as a dominant player. Canale had come off the bench in the first game of the season against Santiago Canyon and played a stellar game scoring a goal in the second half to help lead the Corsairs to a 3-1 victory.

With his skills and talent, Canale earned his spot on the starting 11 after the second game as he continued to be a key player for the Corsairs offense.

Canale finished second in the state and first in his conference by scoring 23 goals in the season.

Canale’s scoring ability and technique earned him First-Team All Conference and was voted as the team’s Most Valuable Player.

“It’s hard to stop a player like him because he’s able to score a variety of different goals,” Pierce said. “I believe he will have a good future ahead of him wherever he decides to go.”

Although Canale now knows his chances have increased by staying at Santa Monica College this past season, he has yet to make a decision as to where he will attend.

“I’m focused on the present and my next step is to finish school and play while I’m there,” Canale said.