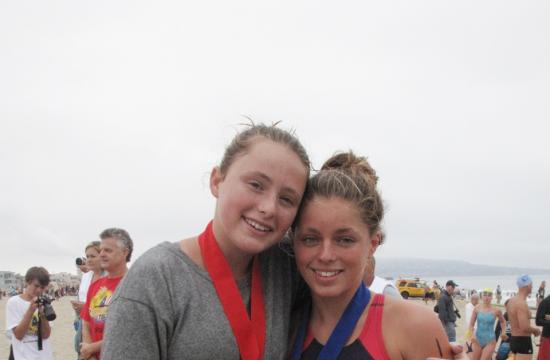 Disabled 14-year-old freshman Serafina King qualified to be on the Samohi varsity swim team this week beginning a new chapter in the aquatic life of a paralympic champion who will soon be representing the Vikings in CIF Southern Section Swimming competitions.

King is different from able-bodied swimmers in that she has a brachial plexus injury that affects her nerves, muscles, and bone growth in her right arm.

King was born with this disability but that hasn’t stopped her from swimming, competing, and winning at a high level.

Making the varsity swim team at Samohi is no easy feat for even an able-bodied swimmer so it is rare that a swimmer like King has been able to overcome adversity to get a qualifying time to be on varsity.

King frequently trains with her sister Tess King who is a sophomore at Samohi, and was the only underclassman on the Samohi Girls Varsity Swim Team last year placing either first or second during regular meets in the 100 fly, 200 IM, and 500 free.

Swimming against and training with her sister has made King fiercely competitive and this has led to her success in smashing the American Paralympic Swimming Record in the 50-yard S10 backstroke with a time of 33.32 as well as holding the second fastest S10 time in the US in the 100 meter backstroke.

When King isn’t swimming, she is a LA County Junior Lifeguard and has competed each year at regionals in paddle-boarding and open water swimming.

With her go-getter attitude and drive, King has managed to blend in with other teenage female athletes, and through hard work and dedication to the sport of swimming, King is able to compete against able-bodied girls even though she has some permanent loss of function in her right arm.

“My friends don’t consider me disabled,” said King. “And I’m always training normally and not like I’m disabled.”

King began swimming when she was seven-years-old in order to avoid the alternative of going to the Children’s Hospital in Santa Monica every single day for physical therapy.

“I hated it so much,” said King. “Everyday I had to get in the pool and I had to do one arm freestyle because my right arm couldn’t get out of the water. My mom said she wanted to cry when she watched me swim because it was so sad but now I am happy she made me do it.”

King’s right arm, which is three inches shorter then her left arm, has no bicep muscle activity, no tricep activity, and very weak scapular and pectoral muscles, but in the big picture there isn’t anything she can’t do now save a back bend or a handstand.

After half a decade of swimming in lieu of physical therapy, her body learned how to compensate on its own, and this gave her courage to begin swimming competitively.

“When I was about 12 years old, my mom was looking online and she was seeing all these kids with disabilities swimming,” said King. “My mom looked at the time standards and I had pretty good times and she thought I could do really well.”

King went to her first disabled meet in Santa Clara when she was 12 years-old but didn’t qualify because according to King she “was too able bodied.”

But the following year, the competition rules changed and King was allowed to compete.

“S10 is the highest class because we are the least disabled and most able bodied,” said King.

King worked hard in competition and by Dec. of 2011, King had climbed up the ranks of S10 disabled swimmers and was ranked second in the country and 18th in the world in the 100 meter backstroke.

“But it wasn’t enough to make the team,” said King.

In order to qualify, King needed to obtain a top ranking time in the top ten swimmers in the world at the CanAm trials.

Six months later, King set an American record in the 50 meter backstroke at the CanAm trials scoring a time of 33.32 to beat the previous record of 33.97.

Looking forward, King hopes she qualifies for the upcoming U. S. Paralympics Spring CanAm Swimming Nationals on April 4-6, 2013 at the University of Minnesota Aquatics Center in Minneapolis.

In the meantime, King will be practicing with the Samohi Varsity Swim Team and competing in CIF against able-bodied girls who will probably have no idea that they are locked in competition against a disabled swimmer.