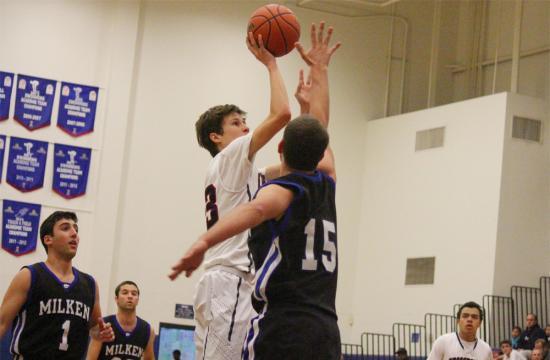 Crossroads(8-7) lost to Milken(12-3) 61-47 in what would prove to be a hard fought battle for both teams with the Roadrunners losing despite having an eight-point lead after the first quarter at home Tuesday night.

Crossroads Head Coach Anthony Davis thought that the Roadrunners had a chance to win but let the Wildcats get the best of them in the end.

“At the end of the day we just got out worked,” said Crossroads Head Coach Anthony Davis. “We took our foot off the pedal and let them get back into it.”

After a fiery showing in the first quarter, Crossroads was looking dominant but the team stumbled in the second quarter and allowed Milken to make too many easy shots.

Milken went on a 16-4 run in the second quarter that shifted the momentum and gave the Wildcats a one-point lead at 27-26 going into halftime.

Milken continued where they left off in the third quarter attacking the basket with their dribble penetration and exploited Crossroads in the paint.

Milken would hold the lead for the rest of the game and secure the victory.

Crossroads recorded a total of 17 steals during their losing effort against Milken.

Brandon Tillis was the only Crossroads player to reach double figures that night.

“It was one of the best games I’ve seen him play,” said Davis.

Tillis scored 13 points in 28 minutes and was shooting with confidence, but it was Tillis’ steals and defensive effort that made him a presence on the court that night.

“I’ve been working on shooting every day,” said Tillis. “I just let the game come to me, and I felt it today.”

Next game for Crossroads is away against Marshall on Friday at 5 p.m.