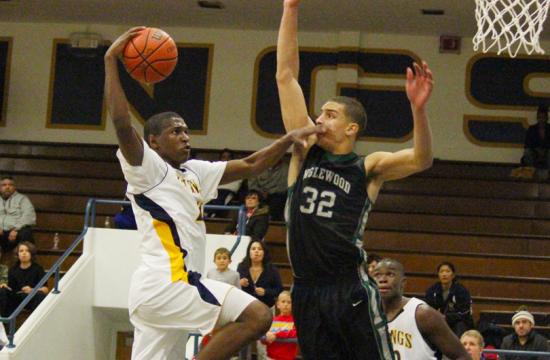 Samohi (18-5) guard Jordan Matthews raced back to defend his basket with a look of resolve emanating off of his face after hitting a three-point shot with 42 seconds left in the fourth quarter for the tie against Inglewood (12-9) to make the game 60-60 at home Monday night.

The shot sent the basketball game into overtime where the Vikings won by a score of 72-68 to stay undefeated at 6-0 in the Ocean League.

Samohi Basketball Head Coach James Hecht thought that the two teams battled out an intense game but the Vikings courage and determination helped them to come out on top in the end.

“It was a ground out dogfight,” said Hecht. “Thankfully we had the answers at the end, and that we had Jordan Matthews.”

Any doubt left in the minds of the Vikings that they couldn’t win the game against the Sentinels began to dim once Matthews became hot, regardless that he was double and triple teamed all night long.

The Sentinels focus on Matthews led to wide open threes hit at precise moments in the third and fourth quarters by Samohi guards Trevis Jackson and Troy Maloney keeping the momentum in favor of the Vikings just when the game could have shifted in favor of the Sentinels.

“We were playing at home and I think our fans helped,” said Hecht. “There was a lot to play for. We are trying to play for that number one ranking in our division. These guys had a lot of courage and determination tonight.”

Hecht thought that the Vikings were lucky to stay in the game the way they did in the first half in order to win in overtime.

“We were fortunate to be in the position we were in because it could have been a lot worse,” said Hecht. “We knew that we could play better in the second half.”

The game was in favor of Inglewood 34-28 going into the third quarter.

“Inglewood was relentless on the boards,” said Hecht.

Hecht thought that the Vikings play against Inglewood was a tale of two halves.

“We got in some foul trouble against them in the first half and we didn’t rebound well,” said Hecht. “We just kept an eye on the point differential and tried to weather the storm.”

Matthews, who had been shut down the first half, made his presence known by scoring 16 points in the third and fourth quarters before adding seven points in overtime, and his play was key in giving the Vikings the edge in the game.

Hecht told the Vikings that the overtime play pitting the Vikings against the Sentinels was an opportunity and a chance to achieve greatness.

“We have four more minutes to extend a great basketball game,” said Hecht. “This is why we work so hard day in and day out.”

In overtime the Vikings came out with both spirit and conviction by playing good defense and passing the ball around the court dominating ball control in a team effort that succeeded in frustrating the Sentinels.

But it was Matthews who stepped up his game on offense keeping a cool head by skillfully drawing in the Inglewood defenders, challenging them up the middle, and forcing them to foul and send him to the line.

Matthews then converted five of six free throws from the line to lift Samohi over Inglewood for the win.

“We could have broke a few times but we didn’t,” said Hecht. “This was a playoff type atmosphere and we were able to step up. We came up with one or two stops we needed to get the victory.”

The Vikings won away against Culver City Wednesday night 67-54 to extend their Ocean League winning streak to 7-0.

Next game for the Vikings is away against Beverly Hills today at 7:30 p.m.