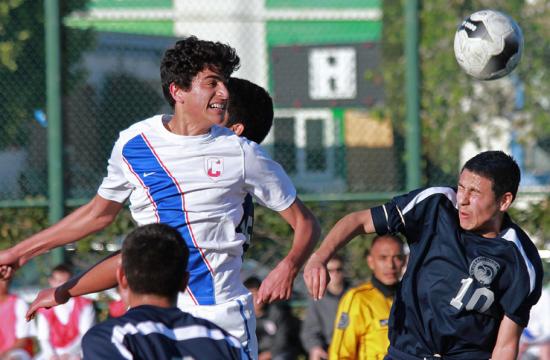 With 15:04 left on the clock, Crossroads (16-3-3) forward Eli Berg-Rosenblatt scored the first of his two goals to tie the game 1-1 against Silverado (17-4-3) in the CIF Southern Section Quarterfinals cracking through a seemingly impenetrable defense at home Friday night.

The goal looked to change the tide and fortunes of the Roadrunners boys soccer team in a winner advances loser goes home soccer playoff game, and for the moment it did.

Less then five minutes later, Berg-Rosenblatt hit his second goal of the night giving the Roadrunners a 2-1 lead in what looked like a sure comeback victory over the Hawks.

But with only seconds left to play and emotions running high, Hawks forward Ariel Correa hit a goal to tie the game 2-2 and forcing overtime play where Correa hit a golden goal to seal the deal to knock Crossroads out of the playoffs.

Correa believes that the Hawks won because they never gave up.

“We had to pressure through everything,” said Correa.  “We kept pushing through and never gave up on anything.”

Hawks Soccer Head Coach Jimmie Gleason thought that Silverado has a good roster of players who have been down the comeback road before and that contributed to their ability to win over the Roadrunners.

“Early in the season we gave up a lot of early goals so we had gotten used to coming back,” said Gleason.  “Today we got our early goal to get that lead.  Then we got lazy but Ariel, the guy who got the goal to send us to overtime and who got us the golden goal, gave us leadership and that was very important.”

Crossroads Soccer Head Coach Federico Bianchi thought that the loss to the Hawks was a mixture of jitters and bad luck.

“I think we were a little nervous in the first half against a very good offensive team,” said Bianchi. “Second half we really picked it up and I put in another forward up top and it really changed things and we were able to get two goals quickly.  And then we went defensive and were one kick away from winning this game.”

Crossroads ends their 2012-2013 soccer season on a bitter note, but in retrospect the Roadrunners have rose to the challenge and become a soccer powerhouse in the Westside region establishing a solid foundation for the years to come.