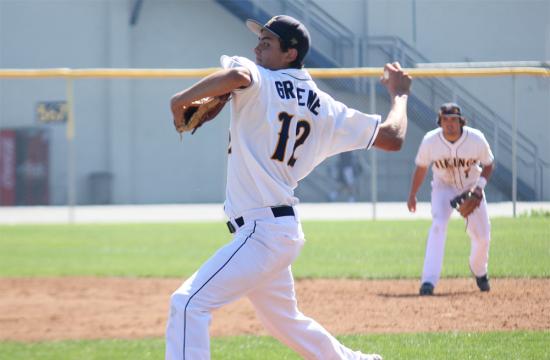 It was the seventh inning and Ventura (0-1) had a chance to stage a comeback against Santa Monica (1-0), but relief pitcher Alex Gironda stepped up and retired two batters to deny the Cougars a victory in the Vikings triumphant 3-0 opening day shutout.

Samohi Baseball Head Coach Kurt Schwengel was proud of starting pitcher Connor Greene who pitched the first six innings and relief pitcher Gironda for securing the win, but thought that the Vikings base running was in need of improvement.

“We had lights out pitching (today) and it’s been that way all fall,” said Schwengel. “But we gave them five outs today and had we not done that, who knows what the score could have been?”

From the start of the game, Greene pounded the zone with fastballs and struck out the Cougars bench in a quick one, two, three first inning.

The quick strikeouts gave the Vikings confidence that could be seen in the first at-bat of lead-off man Alex Turner who displayed patience at the plate by drawing a four-pitch walk to start the bottom half of the inning.

Following a sacrifice bunt to move Turner over to second base, first baseman Eric Gomez lined a single to bring in Turner to put the Vikings up 1-0.

Greene went to work for the next five innings and kept the Cougars off balance with an array of curveballs, splitters, and fastballs striking out a total of nine batters and limiting Ventura to only three hits and four walks.

“I noticed they were biting on the curveball so I was working a lot with that,” said Greene.

Samohi tacked on a run in the fifth inning on an RBI single by catcher Lino Laris to extend the Vikings lead 2-0.

After reaching 100 pitches, Schwengel made the call to relieve Greene with  Gironda in the sixth inning.

Gironda completed the final two innings for the Vikings striking out two Cougars batters in the process.

Next game for the Vikings is away against Notre Dame (1-0) in the Southern California Invitational Wednesday at 3 p.m.