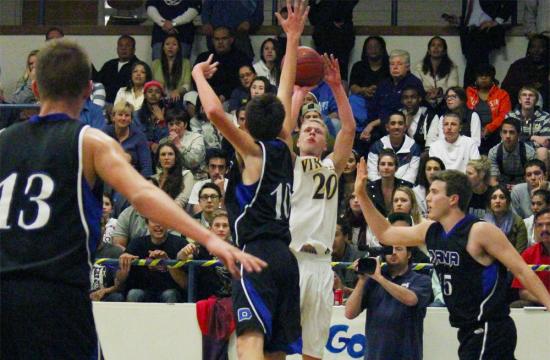 Santa Monica (24-6) defeated Dana Hills (23-8) 60-41 in the CIF Semi-Finals in front of a packed crowd of Vikings faithful in a game where the Vikings dominated the boards and stunned the Dolphins into submission at home Tuesday night.

With the win, the Vikings advance to the CIF championship game.

“We beat a very good team tonight,” said Hecht.  “We knew that a loss meant that the season would be overand now we got one more so I hope we can bring it home.”

Samohi went up 12-0 in the first quarter with guard Jorden Matthews getting hot early dominating the boards stunning Dana Hills into a stupor and causing the Dolphins to turn over the ball numerous times and miss their shots.

“Our intensity level was very good,” said Hecht.  “We were able to sustain that level for long stretches of time.  We know basketball is a game of momentum change and we knew they were going to go on runs and they did.”

Matthews kept the intensity going throughout the game and was unstoppable, relentlessly continuing to score baskets adding 14 points in the second quarter alone.

The Dolphins were forced to double and triple team Matthews which allowed guard Maloney to get hot and score seven points in two minutes during the second quarter.

By halftime, Samohi had extended the lead dramatically and the score ballooned to a whopping 40-15 Vikings lead.

“We put the clamps on them early,” said Hecht.  “We sustained that for four quarters.”

Matthews finished the game with 30 points while forward Smith had eight.

Next game for the Vikings is away against El Toro at the Anaheim Marina Saturday at 6 p.m.