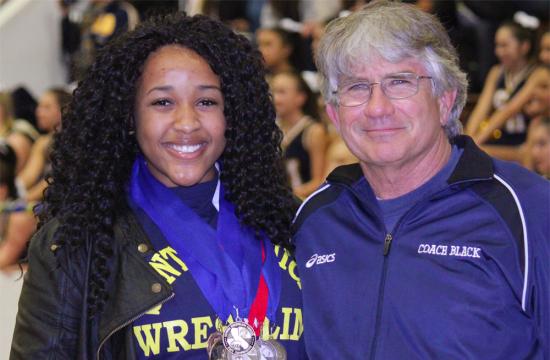 “Jessica came out with tremendous focus and wrestled her best,” said Black.  “It was a great night for her.”

The win marks the third time Walker has appeared in the championship bout and the second time she has won the title. Walker placed second in 2011 and first in 2012.

Tyrone has been the only wrestler to beat Walker since 2011.

“The win was amazing because I barely ever pin her,” said Walker. “The whole last year I couldn’t pin her and then this year I pinned her my last match. It was an intense match.”

After the match, Walker had difficulty fending off the plethora of colleges that were interested in her wrestling skills.

Walker said that she attributes her only loss to Tyrone to being “nervous” and “not eating” prior to the match.

Walker was presented with an achievement award for her accomplishments at the Samohi basketball game Tuesday night during halftime.

Black said that he was proud that Walker has conquered her fears to become successful in high school wrestling.

“To see her step on the map and do what she did, she was able to come out as a true champion,” said Black.  “She was able to overcome the pressure of the moment during the match and go out like a champ with the win.”

To read more about Walker’s 2012 wrestling awards, visit the story at smmirror.com.

Check back in the sports section at smmirror.com for updates and interviews to the story.