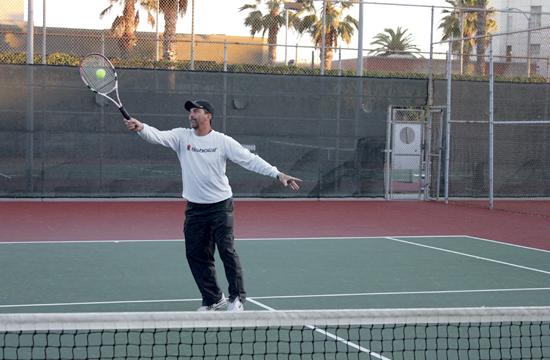 Santa Monica Tennis Club is gearing up for its first tournament of the year next Sunday, Feb. 24 at Reed Park at Wilshire and 7th Street with the theme “Swinging Valentines.”

The club, which is a non-profit organization, is opening the tournament to the general public.

Tournament Director Jane DuBovy said it would be Round Robin mixed doubles format with changing partners.

“You will play with your guest for at least one set so long as they qualify for that session,” DuBovy said. “Sets will be pre-determined so it’s important to get your entries in early to allow for competitive matches.”

She said the matches would be organized by ranking where possible. Anyone without a partner will be matched with someone of similar skill.

SMTC events director Ray Hugill said the club was looking for all levels of players from 3.0 to advanced to take part in the tournament.

“Our main focus is bringing in players who like a little bit of competition in a social setting,” Hugill said. “It’s not going to be a cut-throat type tournament, it’s hopefully going to be great competition with opportunity to socialize before, during, and after. We go to dinner following the last matches.”

The order of play for each session will be that each person will play four mixed doubles matches (each nine games total in length).

A dinner will be held at 5 pm at Lares Restaurant, located at 2909 Pico Boulevard in Santa Monica, where “sweetheart prizes” will be awarded.

Winners will be determined by most games won overall per gender.

Trophies will be awarded to 1st and 2nd places plus honorable mention in the SMTC newsletter.

The total cost for this “sweet package” of tennis and dinner is only $25 per person. For players only wanting to take part in the tennis, the cost will be reduced to $15 per person.

DuBovy said all six tennis courts would be used, meaning there were a maximum of 24 spots per a session and all players will be on court for their entire duration of their session.

“The intent is to make sure there is exciting tennis and that people will hang around afterwards and eat,” she said. “A lot of people like to play tennis and then go. What we did is make the dinner so cheap, so that you get both tennis and dinner for just $25. We’re not running this as a money making proposition at all, we cover the cost of courts and tennis balls with the entry fee and we are underwriting some of the cost of the dinner.”

For anyone interested in becoming a club member, the dues are inexpensive at just $75 for the year.

DuBovy said the club offers all kind of low cost activities such as Friday night socials, Sunday open play, Action Ball clinics (think cardio workout where you hit three to four more balls than a normal match), and tournaments throughout the year.

“We are excited for Friday night socials starting up again for the year in March,” she said. “Once a month for $12 we get a group of 24 people together and we play matches and then we go to dinner afterwards. It’s a fun club. For example on Sundays, you can pay $10 for the day and put your name on a sheet and someone will start playing tennis with you. How great is that?”

For more information about the club or to sign-up for the tournament, email njDuBovy@yahoo.com or visit www.santamonicatennisclub.com.