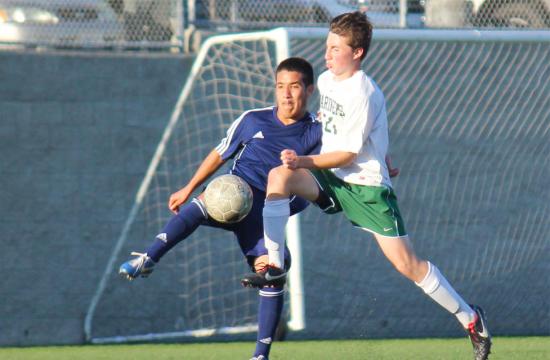 St. Monica (15-6-2) fell to Lennox Academy (17-6-1) 2-0 in the CIF Quarterfinals eliminating the Mariners from the playoffs Friday afternoon at Airport Park.

St. Monica Boys Soccer Head Coach Rimal Patel was proud of the Mariners for making it far into the CIF Southern Section playoffs.

“We are in deep territory,” said Patel. “This is the first time our school has ever been here.  We played against a talented team that we haven’t faced before.  We had our opportunities but didn’t make the most of them.”

“The movement was good, the passing was good, and the boys were communicating,” said Wright.

Lennox midfielder Carlos Payeras scored the first goal during the first half to put the Panthers up 1-0 over the Mariners.

“It was a great shot,” said Wright.  “It was all accuracy with great passing to set it up.”

“It was set up well and the movement was good,” said Wright.  “There was no power on the shot and it was all precision.  I liked it.”

“Everybody was still sore from the last game and we had players that were injured,” said Patel. “We gave it our best but we just weren’t ready.”

The Mariners end their season reaching the CIF Southern Section Quarterfinals after coming into the playoffs strong as a wildcard seed at 8-1-1 in the competitive Camino Real League.