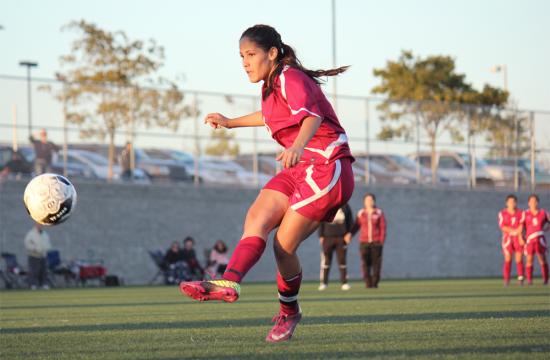 St. Monica (18-4-1) lost to University Prep (14-2-3) in the CIF Quarterfinals in a riveting sudden death shootout after the game was tied at 1-1 after double overtime handing the Mariners their first loss of the season at Airport Park Thursday afternoon.

“We came here with open minds and were determined and focused,” said Candelario.  “But at the same time, we knew it was going to be a challenge going up the number one ranked team in Division VII.”

University Prep took the lead early in the first half with a goal by Jaguars forward Marlyn Espino and shut down the offense of St. Monica refusing to allow the Mariners to score.

But in the second half, Katie Grimm rose up to the challenge for the Mariners and scored on a penalty kick after starting goalie Justice Borden received a yellow card for a personal foul against Mariners Sasha Mayer inside the goal box.

Both teams struggled to score but the game launched into an intense sudden death shootout after the game ended after double overtime with the score tied at 1-1.

University Prep’s Nadia Lauren scored the winning kick that put the Jaguars up 5-4 in the shootout ending St. Monica’s run in the playoffs.

“This is the best season to date in the history of the girls soccer team so I am really proud of the girls,” said Diorio.  “Obviously it didn’t end the way we hoped but it was a good run.”

Candelario thought that the Mariners played hard and fought well but lost to the Jaguars who were underdogs going into the match.

“Like I told the girls, only the strong survive,” said Candelario.  “They showed heart and dedication out there today.”