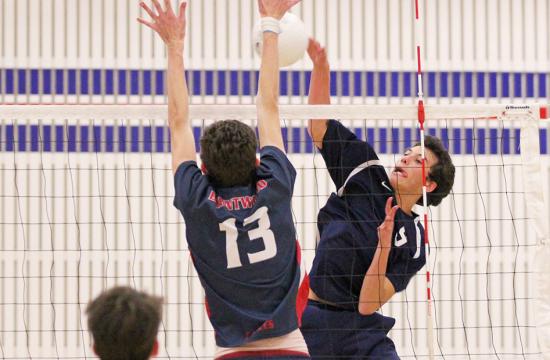 Crossroads (4-0) boys volleyball won their first league game against Brentwood (1-2) soaring over the Eagles 3-1 at Brentwood High School Friday night. The Roadrunners lost the first set 27-25 before climbing back on top to win the next three sets 25-19, 25-23, and 25-15.

“It’s our first league game and I think we played well,” said Deutschman.  “We lost the first game but then we just buckled down and came back tough and gritted it out.”

Deutschman said that the Roadrunners have worked hard in order to win this season.

“They are young and they are hungry and they work hard,” said Deutschman.

Crossroads libero Lucas Kaplan flew around the court diving to keep the ball alive on defense in the third and fourth sets while outside hitters Nick Graves and Aaron Lipp added the firepower to overcome the Eagles.

“My libero had some good digs and my outsides had a good game,” said Deutschman.

The Roadrunners are looking to improve their play in the Alpha League after making it to the quarterfinals in the 2012 season and start off their 2013 season on a positive note with the win over the Eagles.

Next game for Crossroads is a rematch against Brentwood Tuesday at Brentwood High School at 5 p.m.