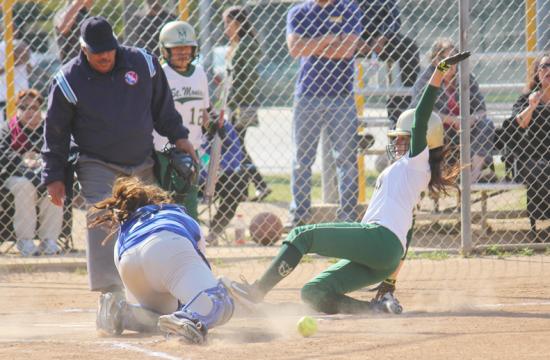 It was the top of the third inning and the St. Monica (4-7) softball team was down 5-3 against Culver City (3-7) when Mariners Veronica Navarro bested Centaurs pitcher Jessica Faber by slapping an inside the park home run to make the game 5-4 at Veterans Memorial Park in Culver City Wednesday afternoon.

Mariners Aliza Chacon got on base with a line drive grounder soon after and cautiously made her way to third base before she was hit in by Mariners Alyssa Gutierrez to tie the game 5-5.

But that was as close as the Mariners would get to winning the game against the Centaurs who won the game 11-6.

“The bottom of their line-up was killing us,” said Sargent. “They were getting on base because we were making mistakes.  I have a young squad out there and we are trying to play a big girls game but we gotta be able to end with the ball when it comes to us.”

St. Monica was all smiles and ready to snap their three-game losing streak after Gutierrez scored, but the Centaurs responded in kind delivering a crushing blow in the following innings outscoring the Mariners 6-1 to make the final score 11-6.

The Centaurs broke the 5-5 tie in the fourth inning when Culver City’s catcher Lisa Kamba slapped in Faber and Miranda Myers on a triple off of Mariners pitcher Chacon to make the game 7-5.

Centaurs Melody Rodriguez then sacrificed a hit being thrown out at first, but not after scoring Kamba to make the game 8-5 Culver City and netting an RBI in the process.

In the top of the fourth inning the Mariners had a chance to rebound but their offense stalled as soon as Centaurs pitcher Breauna Dunlap relieved starter Faber.

“Breauna pitched a great game,” said Sargent.  “My other pitcher Jessica did a great job too but we had five errors early in the ball game.”

In the fifth inning, Mariners pitcher Chacon looked tired as Culver City’s Kamba came in a few hits later to smack a home run batting in two Centaurs runners in the process to put the game away at 11-5.

The Mariners Crystal Casey finally figured out Centaurs pitcher Dunlap and whacked a home run in the top of the sixth inning to make the game 11-6 but by then it was too late for the Mariners to comeback.

The Centaurs quickly got three outs against the Mariners to end the game.

Sargent said that he thought the Centaurs came together in the final few innings and did a good job against the Mariners.

“We’ve been in a big slump and it was good to see the girls play almost together today,” said Sargent.  “There are some mistakes that we still got to work out but I am proud of what they accomplished.”

Next game for St. Monica is away against Mary Star of the Sea on April 9.