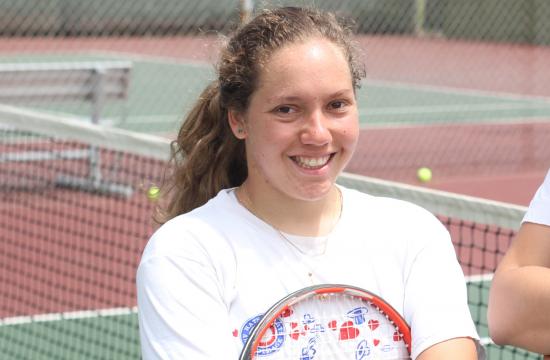 SMC tennis captain Juliana Nelkin is quickly gaining notoriety while rising through the ranks of the community college tennis world.  She is currently undefeated in the singles division as well as being part of the top-ranked doubles tennis team in the Western State Conference.

Under the leadership of Nelkin, the 2013 SMC tennis team is ranked number one in Southern California by the Intercollegiate Tennis Association with an 11-1 overall record.

Santa Monica College Tennis Head Coach Richard Goldenson said that he was very happy to have been given the opportunity to coach Nelkin.

“Juliana is a fun player to watch,” said Goldenson.  “She blends power and finesse in a way that frustrates her opponents.”

In 2012, Nelkin was ranked number 24 in the singles division and third in doubles division by the Intercollegiate Tennis Association.

Nelkin came onto the community college tennis scene as a freshman.  She was part of the unstoppable 2012 Corsairs tennis duo that included tennis star Chris Rodriguez. Together the pair climbed to the top to become the third ranked doubles team in California.

Nelkin is now a sophomore and has only improved her play during the 2013 season advancing quickly through the ranks of community college tennis players dominating the singles division and mastering the doubles team with Kaori Tsuda.

Glendale College faced a similar fate in the doubles match that saw Nelkin and Tsuda defeat Sofia Tavitian and Allie Amor 8-5 to lead team SMC to victory over the Vaqueros 7-2 on March 14.

Nelkin looks to remain undefeated in the singles category with her final match of the regular season at Ocean View Park Tuesday, April 2 at 2 p.m.