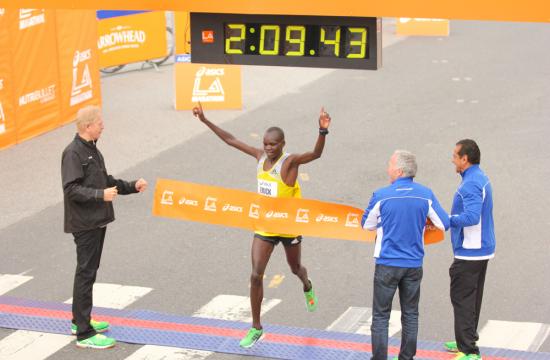 The 2013 Asics LA Marathon Stadium to the Sea course brought together over 24,000 runners from around the world which started at Dodger Stadium this morning and will culminate in Santa Monica Sunday afternoon.

After the LA Marathon, Mose said it was not easy for him to win the 26.2 mile race that cuts through Echo Park, Silverwood, Hollywood, and Beverly Hills before flattening out to around 600 feet when winding through the Westside.

Mose said that he attributes his win to training at high altitude in the mountains of Toluca, Mexico that are 8750 feet high.

“In the race I go very fast because I train at high altitude,” said Mose.

Kastor, a forty-year-old mother of two, finished third in the women’s race with a time of 2:32:38.

“The sport is beautiful with 24,000 people inspiring each other on the starting lines,” said Kastor.

Ultra-marathoner Julie Weiss made it to the finish line of the LA Marathon in Santa Monica Sunday afternoon. This is the 52 race in 52 weeks that Weiss has competed in while raising money for pancreatic cancer.

At mile 6, the woman’s pack of five had no clear leader by mile five setting a 2:27 pace with the lead shifting between Deena Kastor of Mammoth Lakes, CA, Aleksandra Duliba from Belarus, and Ahmed Zemzem, Shuru Diriba, and Aberash Nesga of Ethiopia.

Duliba is running in her first marathon.

By mile 8, the women’s pack had dropped favorite Kastor.

By mile 11, Duliba and Zemzem had broken away from the pack of four to secure the lead.

Duliba broke away from Zemzem in Mile 19 and is looking to beat the $75,000 award if she arrives at the finish line before the men.

At mile 4, the men’s pack was led by Simon Njoroge, Philemon Baaru, and Nicholas Chelimo all of Kenya averaged 4:58 a mile.

Real time race results of all the times of the LA Marathon runners can be found at www.lam.xacte.com.