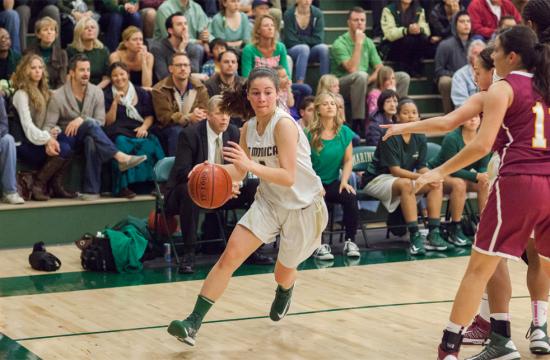 As if three victories weren’t enough, St. Monica defeated Cantwell-Sacred Heart 52-43 for the fourth time this season with guard Briana Harris scoring 30 points for the Mariners in the CIF State Playoffs win in front of a sellout crowd at home Saturday night.

St. Monica Basketball Head Coach John Skinner said that the Mariners won for the fourth time because they were able to outpace the Cardinals in the second half.

“It is tough to beat a well coached team four times and we were fortunate enough to do that,” said Skinner.  “They played a great second quarter but I think we were able to wear them down defensively in the second half. When you have a player like Briana Harris hitting big shots throughout, it makes it a tough hill to climb for the opponent.”

St. Monica jumped out to an early 9-2 lead.  By the end of the first quarter, the Mariners had jumped ahead of the Cardinals 16-9 behind the offensive leadership of Harris and strong defensive pressure led by tower forward Melisa Maragnes.

Yet Skinner was forced to bench Harris for much of the second quarter due to foul trouble.

Without Harris at the helm, Cantwell-Sacred Heart adjusted to the defense of St. Monica utilizing the shooting abilities of seven different players to outshoot the Mariners 18-11 in the second quarter to tie the game at the half 27-27.

Harris returned in the third quarter making her presence known early with a deep three.  Along with a few adjustments, the Mariners were able to keep the Cardinals scoreless for the first four minutes of the third quarter.

“I am extremely proud of how Harris has come through the last two games and led the team despite foul trouble in the first half,” said Skinner.”Her maturity and leadership during tough situations has improved immensely.”

By the end of the third quarter the score was 40-34 and the Mariners held onto the momentum gleaned by Harris offensively outscoring the Cardinals 12-9 in the fourth quarter.

“Harris scored thirty points but many of those opportunities were created by a team effort defensively,” said Skinner.  “Players like Elena Kostadinov and Katrina Balatico hit some key shots and Molly Tomlin and Gloria Scipioni did a great job on the offensive boards to give us opportunities at the all-important second chance points.”

Skinner said he was proud of the ability of the Lady Mariners to perform so well in front of their home town crowd.

“The atmosphere was electric and it was so great to see the school and community come out and support this team and what they have accomplished,” said Skinner.  “Our gym has a storied past on the boys side and it is nice this girls team can add to that legacy.”

Next game for St. Monica is against crosstown rival St. Bernard (27-8) at home Tuesday at 7 p.m.