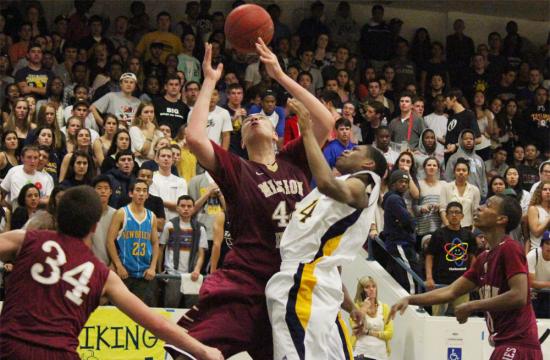 The Santa Monica (28-6) boys basketball team was just smarter and faster then Mission Hills(29-5) outthinking and outscoring the Grizzlies 51-33 in the CIF State Playoffs Tuesday night even though the Grizzlies had 7’0″ CIF San Diego Section Player of the Year Kameron Rooks.

Mission Hills Basketball Head Coach Curtis Hofmeister said that the Santa Monica defense limited the shooting chances of Rooks and that was why the Vikings won the game.

“He’s been a workhorse for us,” said Hofmeister.  “Good things happen when he gets the ball.  Unfortunately we didn’t get him the ball enough and I give credit to them.”

Santa Monica Basketball Head Coach James Hecht said that he thought the Vikings were in control the entire game.

“I thought we were able to control the tempo of the game from start to finish,” said Hecht.  “Again, we beat another good team.  They presented a lot of challenges for us and I am very proud of our guys for executing the game plan and keeping the pressure on.”

By the beginning of the second half, the low scoring game was 23-15 Vikings.

Samohi guard Trevis Jackson gave credit for the win to the Vikings forwards.

“The biggest thing for us in this game was Spencer (Cramer) and Chris (Smith),” said Jackson.

Since Rooks was so tall, the two biggest Samohi forwards Smith and Cramer had their work cut out for them- both Vikings forwards are six inches shorter – yet the Vikings had done their homework and had Rooks’ number.

“We took away his drive foot,” said Jackson.  “He only goes right so I knew he was going to go right. I knew that as soon as his point guards came off of the screens, they were just going to throw the ball to him but I knew it didn’t matter.  He’s seven foot and no one was going to stop him.”

The smaller-sized Vikings managed to limit Rooks to 19 points by outthinking the bigger Grizzlies.

“I figured if I came from the weak side where he can’t see me as a little guard, there’s nothing they can do,” said Jackson.  “Once I took that away and Chris took his shots and Spencer took his shots, he was out of the game.”

The Grizzlies on the other hand focused their defense on keeping Jordan Matthews, Smith, and Jackson in check by doubling up on them and this may have been a good plan if the Vikings bench hadn’t stepped up its game.

With 1:50 left in the third quarter Samohi guard Quinton Foshag came off the bench and went up the middle to score a bucket layup to spring the Vikings ahead 36-24 to add to the woes of the Grizzlies who were trying to play a game of catch-up.

Foshag went on to score six points off the bench in the second half to add to the six points scored by backup forward Spencer Cramer.

In all, the Vikings bench scored 17 points and this proved to be the difference in the game.

Next game for Santa Monica is away against Loyola (25-7) at the Citizens Business Bank Arena in Ontario, Saturday at 4 p.m.

“We’re ready to go against Loyola,” said Jackson.  “After losing to them twice, two heartbreakers, one at home and one in Torrence, we don’t need motivation to get up.  It is just automatic and we are ready to go.”

To read about the home game Santa Monica played against Loyola earlier in the 2012-2013 season, visit the story at smmirror.com.