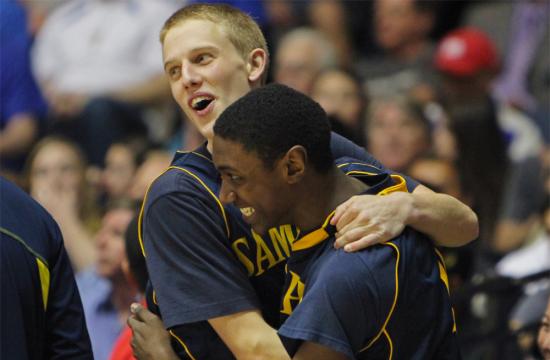 It was an emotional night for Santa Monica High School (25-6) in the CIF finals game against El Toro (27-6) with nerves running high and affecting the shots of both teams, but that didn’t stop Vikings guard Trevis Jackson from uniting his team and pulling off a 66-56 victory over the Chargers at the Anaheim Arena Saturday night.

“I felt the pressure,” said Jackson.  “And I responded to the pressure in a positive way.”

The Vikings went up 30-13 in the third quarter adding to a 17-5 run gained in the second quarter and the lead proved to be too much of a deficit for the Chargers to overcome.

El Toro Basketball Head Coach Todd Dixon thought that it was a tough game for the Chargers.

“Our boys played their hearts out and it was a tough game and Santa Monica deserves it,” said Dixon.  “They played a little bit better then we did and we struggled a little bit shooting and that’s kind of our game.”

El Toro launched a comeback deep in the third quarter but it was stopped when Jackson nailed a three-point shot and converted a pair of free throws to lift the Vikings up 41-29.

But El Toro wasn’t out of the game yet launching another comeback in the fourth quarter and came to within three points at 49-46 with 4:16 left to play.

With the Chargers focusing on Vikings standout guard Jordan Matthews, guard Erron Vaughn and forward Chris Smith found themselves in prime position to drive, make points, and keep the Vikings ahead of the Chargers.

Santa Monica High School Basketball Coach James Hecht said that that the Vikings were able to keep their poise throughout the game.

“Basketball is a game of momentum changes,” said Hecht.  “They weathered a few storms tonight.”

El Toro forward Jacob Lanardi was visibly unhappy with the way the game played out as the Chargers were forced to play a game of catch up after the 17-5 run by the Vikings in the second quarter.

After the end of the first half, the Vikings were ahead of the Chargers 25-13 after a low scoring first quarter that ended tied at 8-8.

El Toro guard Cody White was frustrated about the way the second quarter played against the Chargers.

“We just weren’t hitting shots so obviously it was frustrating,” said White.  “I think it has to do with the fact that we play in a different atmosphere with a different backdrop.”

Hecht said that he thought the Vikings were determined and focused throughout the game.

“Our guys did a great job with their focus and their determination,” said Hecht.

Matthews who scored 30 points in the CIF Semi-Finals against Dana Hills, was limited to 13 points by the Chargers yet still grabbed ten rebounds for the Vikings to end the game with a double-double.

“It’s not about scoring more, it’s about winning,” said Matthews.  “If I’m not hitting my shots and not scoring because they are keying in on me, in previous years I would have just forced it up.  But I had faith in our guys.”

Hecht said that he believed that the Vikings came together as a team against El Toro and that was why they won the game.

“When Jordan got two fouls in the second quarter, our bench really came through,” said Hecht. “All year we have been unfairly labeled as a one-man show but I think tonight we proved that we are truly a team.”

Forward Spencer Cramer was four for six off the bench and had eight points filling in for starting forward Smith who got into foul trouble early in the game.

Throughout the year, Hecht said that he has always thought that the Vikings were a good team.

“We truly believed that we had a pretty good shot at winning the CIF title,” said Hecht.  “Trevis Jackson carried us tonight and when at times it got a little rough and El Toro went on some runs, he was the stabilizing force for us.”

Hecht was emotional after the game and could be seen wiping tears from his eyes as the Vikings players celebrated their CIF Championship victory around him.

“It’s so nice to win this for our high school and the City of Santa Monica,” said Hecht. “It’s been a great ride and we will forever remember these guys.”

Santa Monica won against Narbonne 73-68 in the first round of the CIF-State Division 1 Basketball Playoffs at home Wednesday night.