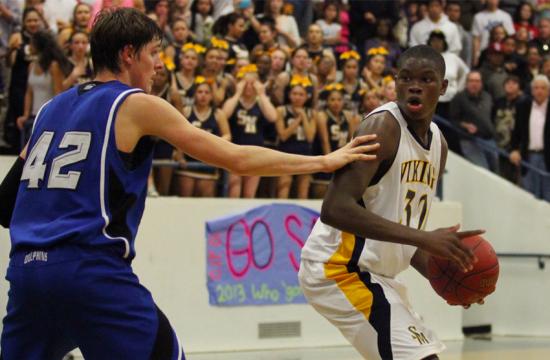 Big players step up at big times and that’s just what Santa Monica (27-6) forward Chris Smith did to the chagrin of crosstown rival Palisades High (23-10) who lost to the Vikings in overtime 76-63 after Smith tied the game 62-62 with 4.2 seconds left in the fourth quarter of the CIF State Playoffs at home Saturday night.

Samohi Basketball Head Coach James Hecht said that the game went as predicted and was happy the Vikings won in the end.

“The game went as we predicted it would be,” said Hecht.  “A drag out knock out 12 round bout and in the end we beat another very good team.”

Hecht said that Palisades could have easily won the game but that the Vikings didn’t allow that to happen.

“They are a good team very balanced and have a lot of weapons,” said Hecht.  “They went on some runs tonight that could have buried us but our guys showed a lot of poise by planting their feet, taking a stand, and answered.”

Smith said that it took a team effort in the fourth quarter to win over the Dolphins.

“We played a really good first half and the team was doing really well playing together and the momentum was great,” said Smith.  “We got our plays in and in the second half we kind of fell off but we pulled it back. It was just a really good team effort in the fourth quarter.”

With fifteen seconds to play in the fourth quarter and momentum in favor of the Dolphins who were up one point at 62-61, Samohi guard Erron Vaughn fouled Pali guard Ryan Ford in order to stop the clock.

Ford missed his free throws and this gave the Vikings another chance to catch up even though there were only seconds left in the game.

Matthews rebounded Ford’s shot and raced down the length of the court before passing it under the basket to Smith who was immediately fouled by Dolphins forward Dakota Chambers.

With 4.2 seconds remaining in the fourth quarter, it was now Smith’s turn to attempt to make a point at the free throw line.

Smith took his first shot but missed, yet was able to convert his second shot to tie the game at 62-62.

“When I missed the first free throw I thought ‘Oh God the pressure is on now,'” said Smith.  “But I just thought back to all the times we have free throws at the beginning of practice and how to focus, get low, and follow through and it went in.”

“The effort Chris gave tonight was just phenomenal,” said Hecht.  “He showed a lot of poise.  When he missed that free throw, he didn’t let that second shot bother him.”

Samohi held on to the momentum gained by Smith in overtime by adding big time dunks courtesy of Smith and Matthews that succeeded in deflating the Dolphins on the Vikings 14-1 run.

“In overtime we just pushed it in,” said Smith.  “We didn’t let them breathe on the offensive end.”

Smith said that the Vikings have bonded together throughout the season and this is the reason they have been winning.

“This season has been great,” said Smith.  “I feel like we have bonded more as a team and have come together to pull this thing off.  We’ve done good.”

Matthews scored 41 points against the Dolphins while Smith scored 15 and Jackson added 13.

Next game for Samohi will be at home one last time against Mission Hills (29-4) in the CIF State Semi-Finals, Tuesday at 7 p.m.