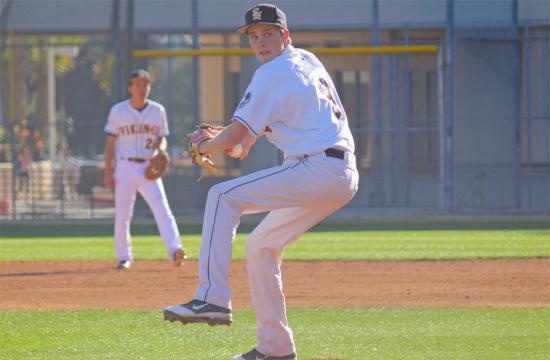 The Santa Monica (3-1) Vikings dugout erupted and players spilled out onto the field as they chased down second baseman Nobu Suzuki seconds after his game winning RBI single against the Buena Bulldogs (1-2) in extra innings to end the game 1-0.

With two-outs in the bottom of the eighth inning, Suzuki stepped up to the plate with a runner in scoring position. Looking to end the game, Suzuki jumped on the first pitch he saw and lined a single into left field driving in Ryan Barbarin for the only run both teams would score all game.

“I was just looking for a first pitch fastball,” said Suzuki. “I like being in that situation because I’ve done it before.”

It was an extraordinary pitchers duel for seven innings with neither team able to score.

The first seven innings of the game was a showcase of two starting pitchers who seemed to be matching each other pitch for pitch. Samohi starter Alex Gironda hit the first batter he faced and then gave up a single, putting runners at the corner. But with some help from his catcher Lino Lares, Gironda was able to get out of the inning striking out back-to-back batters.

“To get out of a first and third no out situation, it was just as much Lino as it was Alex,” said Samohi head coach Kurt Schwengel. “For him to throw out that guy at second and not have them score on it, that’s a big blunder on their part.”

Those two strikeouts to get out the first inning would start a streak of 15 straight batters retired for Gironda, who struck out seven batters during the streak.

“It was just uphill from there, I tried to settle down and throw strikes,” said Gironda. “That first pitch just slipped out of my hand, so you have to come back from that and just do your thing.”

His counterpart, Buena’s Charlie Brooks didn’t face the same first inning jitters, as he struck out the side to start off his game. An error to start the second inning though would give the Vikings their best scoring opportunity all game. With the bases-loaded and no outs, Brooks struck out the next two batters and got the speedy Alex Turner to ground out to the second baseman to end the inning. Following that Brooks would go the next four innings without allowing a hit and striking out six batters.

Brooks ended his day going six shutout innings while only giving up two hits and striking out eleven.

Samohi relief pitcher Andrew Brown pitched the eighth inning and was credited with the win.

The Vikings won away against Birmingham (1-2-1) in the Southern California Invitational Saturday afternoon.

Next game for Samohi is against Roosevelt (1-2) at home Wednesday at 3 p.m.