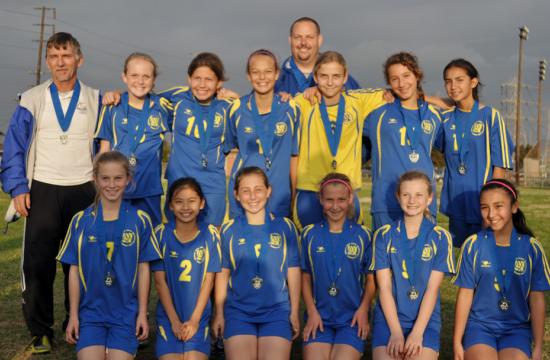 The win secures their claim to the California AYSO Girls U12 Extra State Title.

The Santa Monica AYSO Girls U12 Extra Team beat Camarillo 3-1 earlier that morning in a semi-final game.  The win caps a stellar girls soccer season that continues the dominance of Santa Monica to remain the top team in California.

In January, Santa Monica won the Corona Pony Express tournament before sailing through pool play to meet their Area rival, Culver City, in the final.

“The team wanted to avenge an earlier loss to Culver City in League play, Santa Monica’s only loss,” said Cooper.  “Both teams knew they would likely face each other in the Area playoffs so the game would give one team a lift going into those playoffs,” said Cooper.

Santa Monica broke open the game early and led 3-0 at the half. Culver City responded with a string of goals in the second half, but the girls held them off and won 5-2.

In February, the Girls U12 Extra Team represented Santa Monica and went undefeated in the Area 1-P playoffs, beating three Area rivals to advance as the number 1 seed to the Sectional playoffs in Riverside in March.

Cooper said that In the championship game, Culver City was poised for a rematch.

“Despite giving up an early goal, the Santa Monica girls never gave up and quickly tied it up, took the lead and never looked back,” said Cooper.

At the final whistle, it was Santa Monica four Culver City one. That early goal was the only one allowed by the girls, who combined for 13 goals during the tournament.”

Later in February, the girls went to Riverside for the Locomotion tournament. The girls sailed through to the semi-finals, where they faced an Area rival, South L.A., a team that would go on to win the All-Star Sections.

Cooper said that the Santa Monica AYSO Girls came from behind to defeat the South L.A. Team.

“South L.A. scored first, but Santa Monica never lost hope and battled back to even the score,” said Cooper. “In the second half, Santa Monica took advantage of a tired South L.A. team and put in two more goals and secured the victory.”

In the final game, the girls faced West L.A., who had lost to Santa Monica in the semi-finals of the Area playoffs.

“The game was hard fought and ended 0-0 in regulation play,” said Cooper. “In overtime, an exhausted Santa Monica broke the tie and held on to bring home the victory.”

Two weeks later, the girls returned to Riverside for the Section Playoffs. They faced Corona in the semi-finals, winning handily 4-0 before facing Redlands.

Cooper said Santa Monica dominated the game against Redlands from the start.

“The girls started off with a quick goal in the opening minute and never looked back, winning 3-1,” said Cooper.

With the victory, the girls advanced to the State Games in Davis on Saturday.

Cooper said that a trip to the California State Finals has been a goal of the Santa Monica AYSO Girls U12 Extra Team.

“A trip to the State Games has been the goal of the team for the entire year,” said Cooper.  “For six of the girls, it was a return trip; for the other six, it was a first time experience to represent Santa Monica at the state level.”

Santa Monica will continue to play together in tournaments for the rest of the Spring.