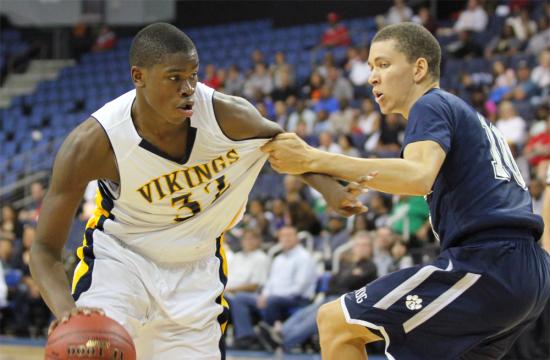 Tonight’s tip off is at 8 pm at Sacramento Sleep Train Arena.

Pleasant Grove defeated a higher-ranked and higher-seeded team (Deer Valley of Antioch) in its regional final to advance to the school’s first CIF state final.

This will be Samohi’s first CIF state title game in the modern era.

Samohi (29-6) and Loyola (25-8) basketball teams were no strangers when they met for the third time in 2012-13 season Saturday night in the Southern California Regional Championships at the Citizens Business Bank Arena in Ontario.

The highly anticipated basketball game didn’t fail to live up to its billing.

With the game tied at 50-50 in the final seconds of the fourth quarter, Samohi guard Jordan Matthews hit a three-point shot to take the lead 53-50, leaving only 1.4 seconds on the clock for Loyola to respond.

But the Cubs didn’t even have enough time to attempt a shot to tie the game.

“From start to finish we competed,” said Hecht. “They had a lot of weapons and lots of match-ups for us. We had to plant our feet a few times and get some stops. This is one for the history books to be sure.”

Loyola basketball head coach Jamal Adams said the Cubs were beaten by a lackluster first half and one play by Matthews.

“We were disappointed with our inability to finish the first half,” said Adams. “We missed shots that we wanted to make. At the end we ran a play and knocked it down, and it took a step behind a NBA three from Jordan Matthews, who is obviously a great player, to beat us.”

Prior to the basket by Matthews, Loyola had surmounted a comeback against the Vikings slowly chipping away at a ten-point Vikings lead culminating with a bucket by Cubs forward Thomas Welsh to tie the game at 50-50 with 1:52 left in the fourth quarter.

“This game is about momentum changes and we knew that Loyola was going to go on a run,” said Hecht. “I’d be shocked if they didn’t.”

In the previous match-ups earlier in the 2012-13 basketball season, it was the Vikings who lost to the Cubs 68-62 and 83-82. But that was not the case the third time around with the CIF Southern California Regional Championship on the line.

Maloney said his aggressiveness against the Cubs helped the Vikings win the game.

“I just wanted to keep being aggressive because I knew my team needed me to score,” said Maloney. “Especially when other people were struggling.”

But when the game came down to the wire and only a second was left to play, it was Matthews who took charge, made the correct decisions, and hit the game winning three-point shot.

Matthews said Welsh wasn’t going to allow him to take the shot after Vikings forward Chris Smith did a pick and roll against Welsh in an attempt to box out the massive forward and get open.

Instead, Matthews found himself alone and hit a three-point jumper from around 33 feet to win the game against Loyola.

“I thought Welsh was going to stay on me,” said Matthews. “Or I thought that Chris was going to slip the screen and was going to give them a lay-up but I saw Welsh hedge hard and I knew he was done after that.”

Matthews scored 19 points in the game while Maloney scored a playoff high of 17.

Pleasant Grove has a season record of 27-6 going into tonight’s championship game.