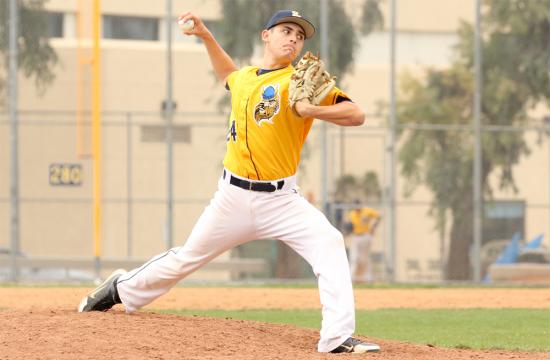 A nice double play to end the first inning got George Washington Prep (0-3) back into the dugout, but not before the Santa Monica Vikings (5-3) assaulted them with six runs to run away with a 18-1 victory over the Generals at home Saturday afternoon.

After obtaining their only hit of the game, the Generals held a very early 1-0 lead in the first inning and that seemed to upset the Vikings pitching.

Starter Nick Jimenez and two relievers would strike out 16 batters during a span of 19 batters retired in a row. This overwhelming pitching made for an offensive outburst.

Santa Monica head coach Kurt Schwengel said that he expected this from the Vikings.

“This would be the result every time, “ said Schwengel. “Facing all left-handed pitchers was really good for us, it gets us ready for our next game.”

The offense started with lead-off man Alex Turner who hit a single to start the first inning. Five consecutive base hits for the Vikings followed.

Nobu Suzuki then drove in the first two runs of the game with one of his two singles.

Mason Landis followed up with an RBI triple and Jonathan Rakulijic’s RBI  single put the Vikings in control of the game with a commanding 5-1 lead.

“I wanted to get us on the board first,” said Suzuki. “We were definitely the better team so I think we showed that today.”

Totaling 15 hits as a team, the Vikings put up another six runs in the fifth inning putting the game far beyond arms reach.

A completely overmatched Generals team had no chance to rebound from the offensive firepower that was produced from a complete Vikings line-up. With a lack of pitching and no offense, George Washington found themselves on the wrong side of a lopsided game.

“We were real aggressive today,” said Schwengel. “Its great to have guys like Turner and Suzuki who are hitting machines, it adds a dimension to our line-up.”

Relief pitcher Danny Galvan was dominant in his two innings out of the bullpen, striking out five of the six batters he retired.

Turner set the table for the offense with two hits, three runs, two stolen bases and an RBI.

The Vikings will get ready to face a strong Serra (7-3) team backed by the pitching of the third top player in the nation Tuesday at 3 p.m.